Got a new drone for Christmas?  The FAA's mandatory drone registration goes into effect December 21, with a staggered implementation.  (Warning for self-starting audio at that link)

Whitaker said the $5 fee is because the FAA is required to cover their costs to process the application (data entry?) and is the same fee they charge regardless of aircraft size.  In other words, your 9 ounce toy drone costs the same to register as a Boeing 747.

Drones are expected to be a hot gift this Christmas, with sales geeks predicting 400,000 new drones flying around.  The other hot gift I've heard of is a GoPro camera, which makes me think there will be a a tendency for those new drones to have a new GoPro camera.

It's reasonable to ask why the FAA thinks they need to do this.  Industry-insider publication Aviation Week says that in a study of 925 drone sightings reported to the FAA, 10% were close enough to be considered a near mid-air collision.

Of the remaining 35.5%, classified as “close encounters” by Bard analysts, 90% of incidents occurred above the 400-ft. altitude limit for flying small unmanned aircraft, and a majority occurred within 5 mi. of an airport, where operations are prohibited without approval from the tower.

Of the incidents categorized as close encounters by Bard, 116 involved multiengine jet aircraft—90 of which were commercial airliners ...

So given the exponentially increasing number of drones, they apparently think they need to be able to track them to the owner/flyer, presumably by serial number or other ID on the drone.  Are they thinking that they recover a charred drone from the burned out engine of an air transport aircraft and track it down to the person who caused the incident?  My guess would be: most likely, yeah.

Private pilots I know, who have considerably less momentum and mechanical resilience on their side than these multiengine commercial airliners, are rather concerned about these little toys.   The pull quote in there, IMO, is that the near-collisions are happening "in areas where drone use is prohibited".  Which would be a better use of FAA funds and attention: registering drones so they can track down who caused an accident or educating the new owners what the restrictions to flying that new toy are?

It's an old observation that many laws, like FAA or Maritime laws, are written in blood (example).  An unsafe condition lasts for some amount of time, and then there's a bad accident where many people die.  That accident leads to the development and mandating of systems to prevent that sort of accident.  An example is the terrible 1986 midair collision between an Aeromexico DC-9 and a small airplane (Piper Archer N4891F) near the Los Angeles International Airport that led to the law mandating the use of Traffic Collision Avoidance Systems (TCAS) on commercial aircraft (and affording your correspondent and many of my friends years of gainful employment).

In this case, there is no system to prevent a 737 from sucking a Bebop Drone into its engine intake if someone flies that drone into its flight path.  Even Transportation Secretary Anthony Foxx conceded that registration is only a "first good point" of getting to know who owns drones, and realizes the "bad guys" won't register their drones.

What really needs to happen is to get everyone to realize that once they put that drone in the air - guess what? - they're a pilot.  They have a lot of responsibility, and they need to know the rules on when and where they can fly.  Autonomous drones are a whole 'nother level of trouble and concern. 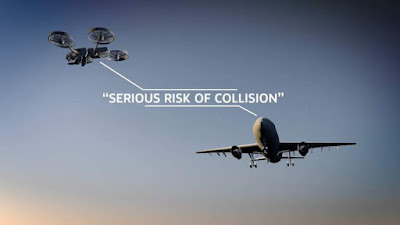