Receivers and Other Radios


The topic of communications or general purpose receivers comes up a lot in our community.  On a couple of occasions, I've had readers drop me an email about radio receivers; either selecting one, or occasionally helping them with one that's not behaving the way they expect it to.  Since I've been designing receivers for most of my career, for everything from satellites and commercial aircraft to my home ham station, I have some experience that I'd hope would be helpful to folks.  I thought I'd put some of it down.

Let's start with a couple of broad questions:  should you get one jack-of-all-trades receiver, or maybe one specialized, good, receiver and one that's more "general purpose"?  How do you even choose one to buy?  If you're not just picking the nicest looking front panel, or the one with price and features you think you need, you're reading specifications, right?

In your mind, you can easily turn that question into another one we always hear: one gun to do everything or a couple of specialized guns, right?  It's the same problem in several ways.  Naturally, opinions would vary, but I lean toward a couple of different radios and a couple of different guns.  Just like you may choose HF for cross-country (or around the world) comm. links, and a VHF for your local AO, you might have a "serious" transceiver and a small, innocuous radio for simple things, like a short power outage.

What about specifications?  In my earliest days of studying receivers, back in the late 60s/early 70s, the criteria that people cared about were "the two S" characteristics of Sensitivity, and Selectivity.  Sensitivity refers to the receiver being able to hear the weakest, just-above-the-noise signals on frequency while selectivity refers to being able to reject undesired signals.  Today, we'd add a third S: strong-signal handling.

For the last 30 years or more, sensitivity has rarely been an issue.  For one thing, to be blunt, we've gotten better at designing these things.  For another, and it's the main advancement in the field, it's easier to get lots of gain at low prices (gain is the term for amplifying; making small signals bigger).  Although Moore's Law hasn't really applied to radio circuitry in terms of increasing the number of functions in a part, the improvement in transistor performance that arguably comes from Moore's Law is one of the drivers in the producing this availability of gain.  The saying is that "gain is cheap" and it has revolutionized design.  Suffice it to say you really don't need to worry about sensitivity in radios designed since the 1970s. You'll have to go back to vacuum tube radios from the 60s and before - and cheap ones to boot - to find radios that need an external preamplifier to be sensitive enough.

Sensitivity is usually reported as some number of microvolts (millionths of a volt) of signal for a specific signal to noise ratio (SNR), but you'll only see that specified on radios with an antenna connector.  For a portable with a whip antenna here's a simple test you can do:  tune it to an unused frequency or a weak station in the shortwave band you're interested in.  Now simply grab the antenna.  If the signal gets better (lower noise, usually louder) the radio isn't optimized.  If the signal gets weaker, the radio is well-designed.  Ever seen people hang a wire off the whip antenna on a portable?  That's a sign of bad design.

Selectivity remains a concern, and hasn't advanced as much as sensitivity - especially in ultra-small, portable radios.  The reason is that selectivity depends on filter technology and there haven't been any major advances in that area over the years.  The cliche here is that filtering comes by the cubic yard. To make filters narrower or to get better rejection of nearby frequencies requires either more parts, or higher quality factor ("Q") parts, and both of those mean "bigger".  For sure, today's continually-shrinking electronics have given us smaller parts to make filters with, but to get a given ratio of bandwidth that the filter is passing to the bandwidth it's rejecting (called its shape factor) requires a number of components that's set by physics, not by fancy design tricks.

Strong signal handling didn't really start being talked about until the early 70s.  Whether it was because of the change over to transistors from vacuum tubes going on around then, or whether it was because of the growing crowding in the RF spectrum, or some other factor, I can't really say.  A lot of factors go into determining the strong-signal performance of a receiver, but the ultimate answer is to make the signal voltages (or currents) small compared to the voltages (or currents) powering all of the circuits, so it's possible that the higher voltages of vacuum tube circuits helped the problem, but it still might be that the denser packing of users is what caused it.

Strong signal handling is sometimes called "Dynamic Range", but that's a term that I don't like to use because it's used for a lot of different things, and that causes confusion.  Because the terms aren't as standardized as pure sensitivity or selectivity, it also means you can be comparing two different radios and find different numbers for their strong signal handling, and that can mislead you into picking the wrong one.  (I prefer to rank by the output third order intercept (OIP3), but I'm not going to explain what it is.  For now.  It could take a post of its own.)

In your everyday use, I'd argue the two most important characteristics are selectivity and strong signal handling.  Improving the first makes the radio bigger while improving the second makes it harder on batteries.  Clearly, pocket-sized, battery-powered receivers are at a disadvantage.

Welcome to engineering, where everything is a compromise.  There are no perfect solutions.  If there were a perfect solution, everybody would be doing it that way and you wouldn't need to choose one.

Where is all this blather going?  There are many good little amateur radios with a broadband receiver in them.  I've mentioned before that my "EDC radio" is a Yaesu VX-6R, a handheld VHF/UHF ham transceiver that transmits on the 144, 222 and 440 MHz bands, using narrowband FM.  It also features a wideband receiver that tunes 0.500 MHz (below the standard AM broadcast band) to almost 1000 MHz (1.000 GHz) (the last few MHz below 1000 are blocked out due to being a US cellular phone band).  If you use the little antenna that comes with this handheld, you'll think it doesn't receive anything below the FM broadcast band.  The antenna isn't optimized for the receiver, it's to work with the transmitter, which is fussier about the antenna.  The receive side is just a broadband input.  If you give it a good antenna, it's fine, but good broadband antennas aren't at all trivial to build and I think any attempt to cover 500 kHz to 1000 MHz would require a few antennas.  Bottom line is that these little radios aren't going to be useful if you need to hear shortwave or below without building antennas.

As an alternative, you can grab something like this: a Kaito WRX-911.  This little, sub-$20 shirt pocket shortwave radio will get AM/FM broadcasts and nine shortwave broadcast bands.  It passes my antenna test: touch the antenna and signals get weaker.  It's not very good at strong signal handling, but neither are handhelds like my VX-6R or its cousins.  That means that if you're in an area with lots of strong local stations, you might not hear anything but them. 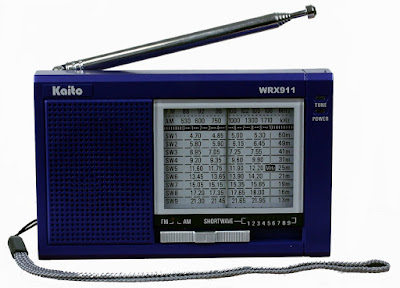 Sometimes a simple radio has its advantages.

Posted by SiGraybeard at 4:19 PM