Just a happy little story from Gateway Pundit, saying that according to a report on Fox News on 12/8, that 100 million new guns have been sold since 2008.


A poster showing Barack Obama is seen in the background as customers line up to look at firearms at a gun shop in Fort Worth, Texas, Thursday, Nov. 6, 2008. The Cheaper Than Dirt gun store recorded a record day of gun sales the day after the election of President-elect Barack Obama and is having trouble keeping up with the demand for assault riffles. (Flickr) 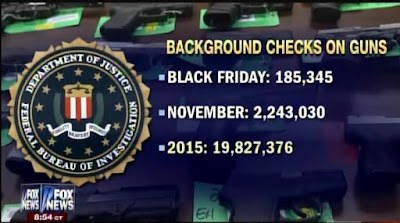 Standard disclaimer:  NICS background checks don't match gun sales 1 for 1, as someone buying more than one need only go through one check.


“Americans are not just putting them in their closet and waiting for a burglary. They’re taking classes on how to protect themselves. Background checks on Black Friday topped 185,000 that’s 8,000 guns sold every hour. 2,000,000 in November and and almost 20 million this year.”

My guess is we'll go over 21 million for 2015.  You see various estimates for the number of guns in America and I think the best answer is "nobody knows".   All you can say is that it's going up steadily and is almost certainly past 350 million.  Might be 400 million.  But that's pure speculation based on me reading that there were 300 million back in '09 or 10.