Energy is life.  It's really that simple.  Anyone who has shivered through a cold night without fuel for their heater knows that simple truth.  Whether it's wood or coal to burn or electricity for an electric heater, the outcome is the same: if it's cold enough with no energy for a heater, bad things happen.  In my mind, the difference between bare survival and comfort is energy, and energy storage is a big part of that equation.  Today, that often means batteries.

I think that houses with modern appliances have a range of storage batteries, from the standby lead-acid batteries (gel cell or the more modern AGM), Nickle-Cadmium (NiCd), Nickle Metal Hydride (NiMH) and Lithium Ion (Lithium Polymer or LiPo) batteries.  The problem with this range of batteries is that they all require different charging methods and strategies.  Even worse, it can even take a different charger depending on the size of the battery you're charging!  All rechargeable batteries discharge when they're just sitting there (called self-discharge); some are worse than others at this.  It means you need to pay attention to keeping batteries maintained so that they're working when you need them.

There's a wealth of information at Battery University, in enough depth to allow engineers to design charging systems.  If you want a bachelors in batteries, head over there.  I just want to point out a couple of things.

The most common batteries are lead-acid.  It's one of the oldest chemistries for a battery in production and so there's more of them available surplus and at hamfests, typically as sealed lead acid and gel cells.  These are relatively easy to charge, but don't tolerate fast charging.  Slow and gentle is the key, although exactly what constitutes "gentle" is up to debate.  A charging voltage of 2.30 to 2.35V/cell gives the longest service life, but the capacity (in Amp-Hours) can go down with charging cycles due to sulfation.  Stepping the charge voltage up to 2.40 to 2.45V per cell results in better capacity, but may lead to corrosion and dry out the electrolyte.  This is easy to live with when the battery isn't sealed, but both of these types are, so it's wise to keep the charging voltage down closer to that 2.4V/cell (14.4V for a "12 Volt" battery).

Absorbent Glass Mat, or AGM batteries, suspend the electrolyte in a specially designed fiberglass mat which has the benefit of making the battery spill proof. This construction offers several advantages including faster charging and instant high load currents on demand, while offering good performance at deep discharge cycles.  I think of them as good, all-around batteries.  The down side is that, like all gelled and sealed units, AGM batteries are sensitive to overcharging.  These batteries can be charged to 2.40V/cell (and higher) without problem; however, the float charge should be reduced to between 2.25 and 2.30V/cell.

I have a dedicated "smart" charger for lead acid batteries, made by Schumacher, one of the big names in the field, and use it for conventional starting batteries, gel cells or AGM.  This is a beefy charger, and will deliver 15 Amps in the fast charge, Constant Voltage/Constant Current mode for charging a starting battery that's in need of a fast charge, but I prefer the slower charging cycle which is current limited at 2A.  This charger offers three charge rates, fast, regular and maintain.  It's intended to be hooked to your boat or RV and left over the winter, so it measures the battery charge state continually, and turns on the trickle charge when needed. 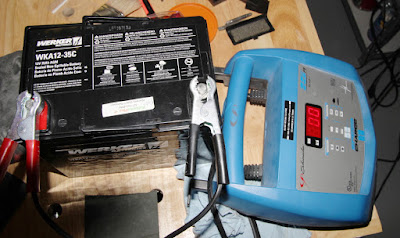 After lead-acid batteries, NiCd batteries are probably the most common.  Both gel cells and NiCads are used in power tools, with most now moving to Lithium chemistries.  NiCad batteries were the backbone of portable radio and other electronics, but as the awareness of the potential toxicity of cadmium started to rise, the industry began looking for replacements, eventually developing profitable ways of producing Nickle Metal Hydride batteries.  NiMH has taken over the market segment from NiCd now, both of them filling the niche for batteries with lower capacity (in Amp-Hours) than lead acid; that require rapid charging, and can be dropped in place of a dry cell (alkaline battery) in most applications.

For example, a NiMH AA cell can replace a AA alkaline in almost any application, although the NiMH has a lower initial voltage, 1.2 vs. 1.5V in the alkaline.  In applications where that voltage is more critical, perhaps in a series string of batteries, where the lower cell voltage adds up to a substantially lower voltage than a string of alkalines, it may not be a good substitution.  On the other hand, the NiMH battery is rechargeable 500 or 600 times (many variables affect that), so while it costs more than the alkaline, your total cost may not be bad.  Another area where the NiMH isn't a good choice is in something sits around, standing by "forever" and not getting used.   NiMH's higher self-discharge rate than alkaline will empty the battery within several months, while alkalines can sit for years.  Consider a flashlight that you want to work that one time you need it; use alkalines, not NiMH.

In terms of capacity, the two chemistries are very similar, but capacity is funny number.  You've undoubtedly seen batteries rated at some number of Amp Hours; perhaps 2500 milliamp hours (mAH) in the case of these AA size batteries.  This is at a specific charge discharge rate; specifically 1/10 of the capacity.  In the case of this 2500 mAH, for instance, that's only if you discharge the battery at 2500/10 or 250mA.  If you setup the battery circuit to draw 250 mA, you should discharge the battery in 10 hours.  Higher current normally leads to shorter battery life and it's not a simple relationship; that is, if you take twice as much current, the battery might not last half as long.  There's a useful chart of this here.  Take the second line, a Duracell "CopperTop" AA.  At a 100 mA discharge current, it showed a 2200 mAH capacity (shown as 2.2 AH); at a 1 Amp discharge, it showed 830 mAH, 1/3 of the capacity at 100 mA drain.  The bottom line of the table is a Powerstream 2000 mAH NiMH battery; at the 100 mA current, it showed less capacity than the alkaline, that 2000 mAH vs 2500 in the Duracell.  At higher current, though, of 2 Amps, its capacity dropped much less than the Duracell, only to 1940 mAH, 97% of the 0.1 A rate.  Further, at a 5 amp discharge rate, its capacity was actually greater - 2110 mAH (although its terminal voltage was lower).

The simplest way to charge a NiCd is to current limit the charge to 0.1C, leave the charger voltage greater than the battery's voltage, and pull the battery off after 15 or 16 hours.  Don't leave it on the charger.  Fast charging needs a smart charger that either measures small changes in the charge rate or the temperature of the pack.  The battery will stay cool (charging room temperature) until just before it's full, when it will go up.

NiCd, NiMH and lead chemistries have a tendency to develop increasing internal resistance, and if they aren't discharged fairly deeply (how deep depends on the battery), will act as though they have much less capacity than they should.  Many smart chargers offer programmable discharge functions, although the Schumacher pictured above doesn't.  To discharge that 35 AH AGM battery, pictured above, I use a 12V inverter to produce 120VAC and turn on a light bulb (incandescent).  I can let it run until the inverter shuts off, or until I measure the desired voltage across the battery to decide when the battery is deeply enough discharged and then turn it off manually.

This photo shows a multi-chemistry smart charger that has a strange story behind it.  I had ordered a similar but different brand/different features charger from Amazon, but fulfilled by someone else.  Within a day or two, they notified me they were out of that charger, couldn't get more, and offered me this one that they had started selling in the store for the same use.  This charger has separate routines for NiCd, NiMH, LiPo, LiFe (lithium iron), Lithium Ion and Lead chemistries, and came with a handful of connectors/adapters for common RC model connectors.   I think this is roughly equivalent - maybe somewhat more capable. 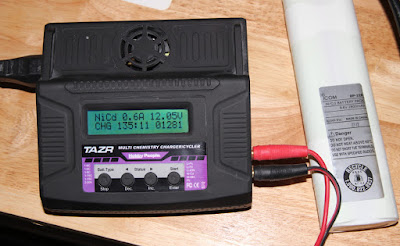 Lithium Polymer is a coverall term that embraces several different chemistries, so lithium batteries are a complex subject on their own.  Li-polymer systems include Li-cobalt, Li-phosphate and Li-manganese.  Most so-called Li-polymer packs are for the consumer market and are based on Li-cobalt.  As far as the user is concerned, lithium polymer is essentially the same as lithium-ion. Both systems use identical cathode and anode material and contain a similar amount of electrolyte.

I'm not really that up on Lithium batteries as everything I have with one has a dedicated charge controller in it.  If you have a phone or tablet or other device with a LiPo battery in it, I'll bet there's a dedicated smart charger IC in the device that manages it.  There's a lot intelligence built into things we take for granted, and it might be that if you sat down to design a charger for lithium batteries, you'd find it pretty hard to do.  I came across a very complete web site with a ton of details on Lithium polymer batteries to consider.  It goes into a refresher on battery terminology and enough details to geek out over for days.

I think if you don't have something like these chargers and you have storage batteries in your plan, you should consider getting something.  My dream system would handle any chemistry, do a programmed discharge and programmed charge, and not limit the charge time, just keep charging.  The TAZR charger pictured will only discharge up 1A, which is a bit low, even for that 2.8 AH NiCd pictured, let alone the AGM battery at the top.

Posted by SiGraybeard at 7:17 PM