Since the last couple of days have been all tech, all the time, tonight will be a little light fare that struck me as interesting little things.  Nothing major, just kind of cool.

Two and a half years ago, I had a "one of those days" moment.  While pulling our boat up to the dock, I fell out of the boat.  I never watch the show, but I think of it as an "America's stupidest home video" moment - feet on the deck while stretching out to reach for a piling - and doing a belly flop into the saltwater lagoon.  The only really bad part of that, the only thing that really cost me, was that I had my iPhone 4s in my pocket at the time, and the saltwater bath killed it.

Since then, I've become a little sensitive about waterproof electronics, so I was interested to note that Kyocera introduced a waterproof/water resistant phone that they advertise being washed with soap and water.  It's not an earth-moving event, but it sure has its advantages.  The phone, which hasn't yet been announced as coming to America, will cost about $450.  Better yet, they filmed a commercial, which comes across as a kitschy '60s type vibe to me.  It's 100% in Japanese, but it's not a waste of your 55 seconds to watch it.

The video depicts a nice looking home, say American upper-middle-class, and that hides the fact that for most of the world the cell phone is becoming (or already is) an indispensable piece of technology.  If  a new nation wants to bring phones to everyone in their hinterlands, they don't need to worry about building out quite as much infrastructure.  They don't need to worry about wiring "the last mile", they need to wire towers into a phone network.  Power companies, though, do need to bring that wire all the way to the last outlet, because wireless power is impractical.  There are ways to wirelessly beam power around at levels that can power infrastructure, but that much energy is dangerous no matter how you get it there; that is, the AC power line can kill you and so can the same energy in a radio field.

Consider "wireless power charging".  There has been a lot of buzz over wireless charging stations for phones,  but the technology hasn't really taken off.  Yeah, they allow you to put your phone on a mat, or a special pad like the Samsung charger pictured, but the bottom line is that it doesn't buy you much.  Your phone isn't very usable while it's charging - at least, not as a phone.   How different is leaving your phone on a pad overnight from leaving it plugged in overnight? 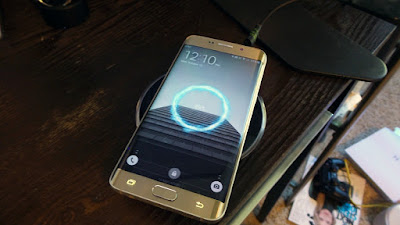 In a guest column for Power Electronics magazine, one author went so far as to as to call wireless charging a $13 billion strikeout.  Bear in mind he's the CEO of company that has a "better mousetrap" to compete with it: portable hydrogen fuel cells that the believes will solve energy problems for good.


Within the next five years, with developments in embedded hydrogen fuel cell and solar and wind technologies, energy freedom will become mainstream. These new ways of delivering power have the potential to alleviate dead battery conditions, eliminate charging-station clutter, and remove infrastructure problems. Unseating entrenched conventional technologies and infrastructure will take time, and while it presents a challenge, it is an equally significant opportunity that will be instrumental in bringing the next 1 billion people online.

We believe in the long-term that, in the future, all consumer electronics could be powered by embedded hydrogen fuel cells, freeing customers from the grid entirely. Similarly to the Wi-Fi revolution, the next revolution in electronics is energy freedom and we’ve already proven it can work. It’s time to challenge the limitations of today’s power limitations. Just imagine the possibilities…

I'm not sure I buy into that stuff about solar and wind being much better in five years.  15 years, maybe, and solar, maybe, but not what he's saying.  On the other hand, I've heard Ray Kurzweil say that solar cells will continue to decrease in cost and increase in efficiency, until they become ubiquitous, so there's some collaboration.