I should say threatened, endangered or whatever critter has gotten favor from the Over Regulated State.

A friend living a few blocks over, I'll call him "Tim", tells me one of those stories that sends ice through the hearts of homeowners.  One night a few weeks ago, Tim's wife told him she saw a gopher tortoise near a back corner of their house.   Gophers are called that because they're borrowing tortoises and he became concerned about it perhaps digging enough that it undermines the foundation.  The next day he went out and found piles of sand next to a burrow apparently going directly under the house.  Some research showed that they ordinarily tunnel at a shallow angle and probably wouldn't endanger the foundation, but after considering the possibility concluded that they'd rather the critter not be under their house.  That's when the "fun" started. 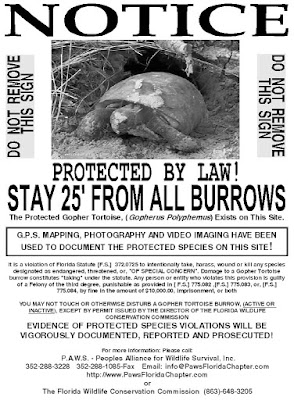 That's when he found out that it's illegal.  Gophers are considered endangered both by the state of Florida and the Fed.gov, and one doesn't simply pick up the tortoise and move it as they please.  Oh, no.  There's a process.  The Fish and Wildlife Commission states:

I read that to say if you don't get a permit and you do accidentally collapse a gopher tortoise burrow while mowing, or God forbid hurt one, "you're in a heap of trouble".  Continuing...


The 10 or Fewer Burrows Relocation permit is for projects, usually single residential construction, which require the relocation of five or fewer tortoises (10 burrows or less).

Notice that all a homeowner is allowed to do, even after taking the one course and getting the state's permission, is to move the tortoise within the boundaries of their property.  If they want to move the animal off their property, they can't just drive it to a nearby park, for example, they're only allowed to use a state-certified recipient site.  And the homeowner can't just capture the tortoise, put it on a pillow, and have a helper fan the tortoise with a palm frond while they drive it to the recipient site; the transfer can only be done by an Authorized Agent.  Being an affair of state, don't expect to get away with doing this at no cost, either:


To obtain a 10 or Fewer Burrows permit, the individual handling the gopher tortoise(s) must either complete the online e-Learning curriculum or have an Authorized Gopher Tortoise Agent permit, and submit a $207 mitigation contribution.

Tim had to take the one hour online FWC training to get the permit to capture his new (rent-free) tenant.  He took the course and found that the system didn't credit him for taking it.  Annoyed by this point, he sat back and waited.  A few days later, an email from the State FWC's IT department told him they fixed it and he was given his due credit.

The tortoise, though, remains under the house.  Tim says that in the early morning quiet, he can hear the sound of the tortoise's home theater system coming through the concrete slab and in the mornings, it smells of stale beer outside.  No, that last sentence isn't true.  I totally made that up.

The disturbing part of this is how common it is.  All across the country, we hear stories of threatened or endangered species interfering with people's activities.  Consider how the diminutive delta smelt's threatened status led to stopping irrigation in California's central valley, some of the richest farmland in America.  The resulting man-made drought continues to this day.  Need I point out that the real problem is conflict between people using the smelt to argue for restoration of a "Garden of Eden", pre-human California, and people who argue humans have rights, too?  The irrigation pumps were stopped despite genuine debate that they were responsible for the smelt's decline.   It's a recurring theme around the country.

Labels: big freakin' out of control government, enviro-nuts and flakes