Guitar maintenance day, that is.

One of the realities of owning and playing guitars is that sets of strings are disposable items.  Some performers replace strings for every show.  Many hobbyists, on the other hand, run a set of string far too long.  I guess I'm in the middle ground, replacing them when I start to see excessive gronk on the strings, discoloration or other signs of corrosion.  They'll start to sound different, too; less lively, which I think means the harmonics of the note get weaker.  I wipe them down after every use, but I suppose that's only surface, and isn't very good.  There are various products on the market for cleaning your strings regularly, and I've used some.

The problem I have is that when you have a few guitars, it turns into a lot of work.  That was set aside for today.  Armed with sets of strings, pliers, an electronic tuner (I love these things!), and several other tools, I got to work around noon.  Last week, I got myself a little gift to make that easier - a power winder instead of using the manual kind.  That made a lot of difference, and was a great addition.  The first thing I did, though, was strip the strings off of my kit guitar and correct something I built wrong the first time - I put the tuners on backwards so that it tuned backwards from every guitar I own.  While she was apart, I polished her body, oiled her fretboard with lemon oil, and generally treated the guitar to a "spa day".  I adjusted the action a little on a couple of guitars. 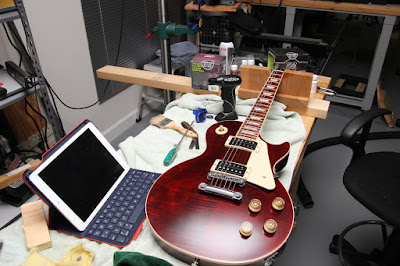 My Gibson Les Paul, with all the tools on the bench.  The power peg winder is to the left of the neck, near the wooden block I rest the neck in while working.  The blue Snark tuner is just left of it.  Screwdriver and feeler gauges, for doing action setup work closer to the camera from that, and in the background, boxes of string sets.  On left is a box of Ernie Ball Super Slinky strings (pink on the box) and to its right, a box of regular Ernie Ball Slinkies (slightly larger diameters).  Just to the right of the neck support block, you can see a small white bottle; that's guitar polish safe for the nitrocellulose lacquer finish on this Gibson, and fine on the poly- finish everything else has.  Behind that, a pair of hook cutting fishing pliers, which make easy work of cutting guitar strings.  Elsewhere, you can make out calipers, canned air for blowing out dust and a small bottle of lemon oil for the fretboards.

The last time I did this was on Sunday afternoon in early September, so you could say they were overdue for it.  I can tell the difference in the sound of the new strings vs. the ones I pulled.  I spent a few hours doing this, but it was enjoyable time.  I'm extremely blessed to be able to do it.