Seems like only a month ago, we were talking about Jeff Bezos' company Blue Origin landing a rocket on land for reuse.  Oh wait... it was just under a month ago, November 23.

At the time, I posted that SpaceX had done it already and was trying to land their first stage booster on a ship at sea.


... I think the Engadget article headline, "Jeff Bezos beats Elon Musk's SpaceX in the reusable rocket race" is not just misleading, it's wrong.  SpaceX made a landing of a suborbital rocket on ground over a year ago, and did it with their Grasshopper technology demonstrator in 2012.  SpaceX has failed so far to land a Falcon 9 booster on small, moving ship at sea, dropping from a greater height.

Last night, December 21, SpaceX had a return to flight mission that included an upgraded Falcon 9 rocket and landing on a concrete pad on the Cape Canaveral Air Force Station.   This was an operational mission, with the Falcon 9 carrying 11 satellites for Orbcomm - Generation 2. 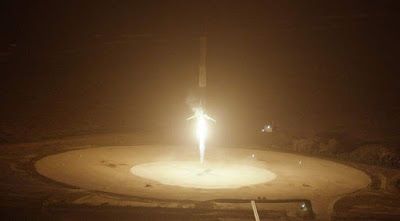 SpaceX argues that reusability is the key to reducing the cost of flight and getting more people into space.  It was the original argument behind NASA's Space Shuttles, although I they never made their cost goals.  As time went by and it got progressively cheaper to build throwaway rockets, the gap widened again.  This is where companies like SpaceX and Blue Origin can make their name. 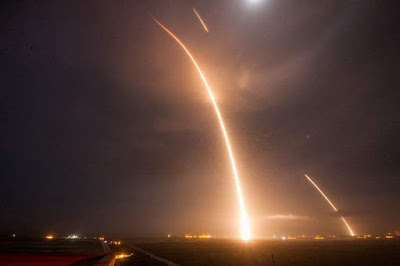 We're all familiar with these time exposures showing rockets leaving for space and leaving a glowing trail image.  But this isn't two launches, and even if it was, what's that third arc, top-center of the frame?  The shorter arcs are two separate burns of the first stage for the return landing.

We went out in the yard to watch the launch last night, but came in to watch the landing on video.  We're far enough from the landing area that it's below our horizon, not to mention behind/below trees, houses and all. All we'd possibly see is the sky lit up from the rockets.