I Bet This Doesn't Happen Where You Live

Why Florida isn't like where you live - (part 1 here).  Unless you're one of the guys from South Florida I link to, Miquel or Mike, you probably don't run into 9 foot long anacondas very often.

A concerned citizen and an airboater had called the Florida Fish and Wildlife Conservation Commission around 5 p.m. Monday. FWC responded and found a large snake on the embankment of the Midway Airboat Rides off of State 50 in north Brevard, said Lenny Salberg, an FWC spokesman. 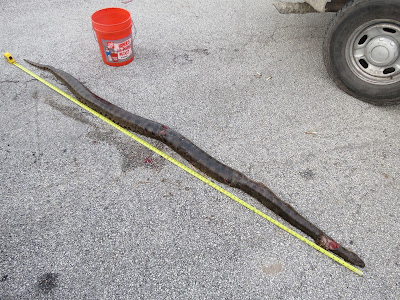 For the record, this isn't exactly my neighborhood; it's about 40 miles from here.  But I can just imagine an anaconda of that size crossing the boat ramp just about anyplace I go.  Imagine backing down the trailer and suddenly hitting a speed bump.

In an unrelated but somehow appropriate event, I was going to print out my forms for the Remington Black Friday rebates and the printer kept jamming on the paper feed.  This is ordinarily pretty reliable, so we opened it up and found a fried and dehydrated little lizard caught in the rollers.  The printer is close to the back doors that open onto our porch/courtyard.

Labels: life, lost and profound, Me