There's an old joke that goes if you laid all the economists in the United States end to end, they wouldn't reach a conclusion.  It seems that any set of numbers is rife for re-interpretation (if not re-imagination) to fit any particular theorist's beliefs.

Bayou Renaissance Man got my thoughts flowing on this yesterday.  His piece is called, "The economy: If you're not worried yet, you should be!" and it's a bit long but worth reading.  For new readers, I come down on the side that the numbers we see that showed a recovery back around 2009 are all lies.  To borrow and paraphrase something "Captain Capitalism" says, all those GDP figures have been "violently raped by Washington DC economists."  (Last sentence, second to last paragraph).

We all know something is rotten economically.  At a minimum we feel it every time we go shopping.   Obama is the first president in US History to preside over eight consecutive years in which GDP growth has not exceeded 3% once.  And that's with those numbers being "violently raped by Washington DC economists."  The Federal Reserve is causing this with all their manipulations of the currency, done entirely to make some numbers on a balance sheet somewhere work out.  They claim inflation is less than 2%.  The fact is that inflation is roaring, with an overall rate close to 8-10% per year since the late '90s, 18 years ago, if the method used to calculate inflation during the Carter years is still used.  That's the blue curve in this plot from Shadowstats.

On top of prices going up, we've seen the phenomenon of "shrinkflation" where the price goes up while the size of the package goes down, giving the illusion that prices aren't going up as much.

A note on methods: if we want to compare current inflation (or anything!) to the past, we should use the same method to calculate it.  Anything else is fraud and deception, but since the Fed.gov tied some outgoing payments to the Consumer Price Index, they've been lying about that number to reduce it!.

The other trend that everyone feels in their wallet is that by several measures, the buying power of the average worker hasn't gone up since about 1970.  It's driving the sense that we have growing "income inequality" in the country.  Now, I hate that term.  For one, there ought to be "income inequality" in any normal, functional economy; the phrase is nonsense.  Who could possibly insist that every job should pay the same amount, except the most devoted communists?  The big problem is that the "inequality" is also calculated using those numbers that have been "violently raped by Washington DC economists."  Right away, I don't believe it.  Is it better than they say or worse?  I don't know.  I redirect you to the opening sentence of this piece.  But I know it's being used to sow the seeds of discord in people.  Remember the Occupy Wall Street idiots with their "eat the rich" signs?  The left has been trying to pit people against each other at least since Cloward and Piven in the 60s; the current "income inequality" stuff reeks of that to me.

Given that income inequality is inevitable, the two important questions become how big and how come? The second is easier to answer: the decrease in buying power in the last 40 years is from the actions of the Federal Reserve and the fake currency they pass off as money. The Fed relies on those violently raped statistics to do what they do. They're the ones who create the 8 to 10% inflation every year while saying it's under 2%; they're the ones who engineered the system to benefit the bankers, stockbrokers and other portions of the "elite ruling class" at the expense of wage earners and savers.  It's a brutal truth that the dollar has lost the vast majority of its value since the Fed was formed and even using the artificial, "violently raped" CPI inflation numbers, the dollar is worth 1/6 of what it was worth in 1971 when we abandoned the gold standard.  It has lost a staggering 83% of its buying power since 1971.

A commenter to that piece by BRM said:


40 years ago I was doing exactly what I am doing today: pushing a broom on the night shift for a local school.  On that wage in 1976 I was renting a nice house in a good neighborhood. I was buying a new car ('74 VW). I had money for food, car insurance, surfboards, wetsuits, restaurants, weed, and beer. I was even building a modest savings account.

Today I make roughly three times as much money. Obamacare takes away over a thousand a month. My net paycheck, just over 2K, would barely cover rent on a shitty apartment. I would have less than a thousand dollars left to make a car payment, pay for insurance, and buy food. In other words, I couldn't make it without working a second job.

Note that he's making three times the number of dollars, not three times as much money, but each one of those dollars buys 1/6 of what the 1976 dollars bought.  He's falling behind and knows it.

This is the fault of our central banking system, and manipulation of the currency.  The Federal Reserve  couldn't do it without the knowing cooperation of the government, and they basically do it to keep the free sh*t flowing for the parasitic class. That nest of vipers (the Fed and the Fed.Gov) has to be cleaned out somehow.  While from what I read here, it seems to be an overstatement, one of Trump's economic advisors is being reported to be recommending we return to a gold standard. We can only hope. 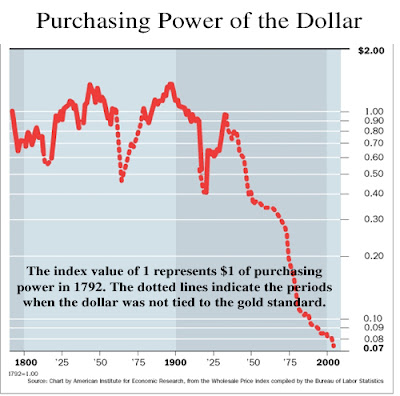 This chart is a little dated, but it has a lot of information in it.  I found it in a Bing Images search, and the source website appears to be gone.