Several people have commented on the FBI's Hillary document dump.  With this administration you know any incriminating documents are going to be released on the Friday before a holiday weekend, when they figure no one is paying attention, and they were true to form yesterday.  Tam sums it up well.


This is about as plausible as "the dog ate my homework". She claimed she didn't know that the "c" meant "confidential", that nobody told her that she should retain work emails as they are part of the public record. Further along in the article, she throws her staff under the bus, in effect claiming that her underlings and minions told the dog to eat her homework.

For the uninitiated, "Confidential" is fully classified, it's just the lowest rung on the ladder of Confidential, Secret and Top Secret.  Anything that is classified has to be handled according to procedure.  At the very least, anyone of the rest of us who handled classified material like this would have been fired, or moved out of a position that involved classified information.  I still believe we'd be in jail.  None of those explanations, of not remembering her training or of having difficulty since her stroke would matter.

Over the last month, we've been getting dribs and drabs implying that there's no freaking way that Comey should have thought there was "no evidence of intent".  Hillary used BleachBit for cryin' out loud!  BleachBit is designed to make it hard for anyone to figure what was on a hard drive.  BleachBit is advertising they stifled the FBI investigation.  One doesn't need a tool like BleachBit to delete yoga-related emails.  This is "no evidence of criminal intent"? 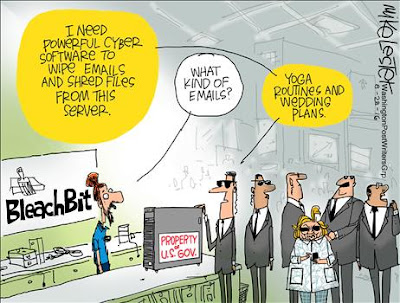 Then we learned that the story of using a single email account for convenience, and a single device (Blackberry) was a lie and there were 13 different devices, several of which the FBI has not be able to get their hands on to search.  In yesterday's document dump we learn that an aide admits to destroying a couple of those devices with a hammer, or by breaking them in half.

It used to be a regular policy that the only way to declassify a hard drive was with a hammer, but it's not clear that protecting classified data is what was going on here.  It could simply be hiding evidence from the FBI - obstruction of justice.

There's no way that Comey could have not known these things were going on - this document dump is from the July 2nd FBI interview with Hillary - and yet he said there was nothing there to prosecute.  As the little cartoon in the right panel says, anyone else would be in jail.  To be, perhaps, redundantly clear, Comey himself said anyone else would be in jail.  From his final statement:


“To be clear, this is not to suggest that in similar circumstances, a person who engaged in this activity would face no consequences. To the contrary, those individuals are often subject to security or administrative sanctions. But that is not what we are deciding now. As a result, although the Department of Justice makes final decisions on matters like this, we are expressing to Justice our view that no charges are appropriate in this case.”

Thanks, Director Comey, you little chickenshit.  You've discredited the FBI and sealed our fate as nation of privileged men, not a nation of laws.