Silencers, Sound Levels, Decibels, and How to Know

A few days ago, I posted a little on the Hearing Protection Act.  If you've paid attention to the SHOT show coverage, you've seen people talking about not assuming it's going to pass this year but we're likely to get it in the not-too-distant future.

Coincidentally, a friend who doesn't follow my blog sent me a link to the National Institute of Occupational Safety and Health, NIOSH, telling about a free iPhone app they provide that will use your phone's microphone to measure noise levels in the standard dBA format.  Naturally I went to the iTunes store and grabbed a copy to play with. 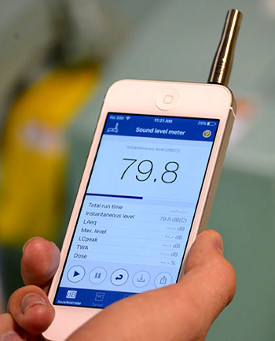 (NIOSH photo)  The app is called NIOSH SLM (sound level meter) and is intended for checking sound levels in an occupational setting - this is NIOSH's domain, after all - so they intend for folks to survey their work area and then get more accurate readings if needed.

SLM runs only on the iPhone and they say there's no android version in development.  Android discrimination?  There's a very logical reason for them to go to iPhones, even if they are going to add android later.  The iPhone is one product with known standards for how the microphone works, the levels it responds to and all the nitty gritty details that are necessary to do this.  Android is actually an open source platform and there are several phones or tablets out at any time.  Different manufacturers use different hardware that may or may not respond the same way.  If Apple changes the hardware in the phone, it's going to comply with the same specifications as earlier phones, as long as they want to keep backwards compatibility.

NIOSH claims that with an external microphone and calibration it will meet the accuracy of higher end instruments, but as it comes with the iPhone it's accurate to "within +/- 2 dB "of a type 1 sound level meter", defined as "Precision" for use in the field or laboratory.  That's pretty amazing.  Like many (not all) audio measurements, the results are expressed as dBA, where A is frequency response curve, sometimes called "A weighting".  The A weighting is supposed to match the response of the human ear to audio frequencies and there are several weighting curves.  A site with a lot of handy information is Noise Help, who provides this handy chart. 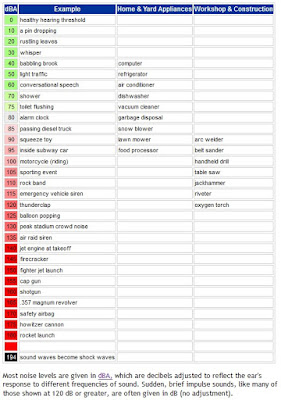 As a guide for when hearing protection is needed you can combine that table with one that the NIOSH website provides.  This is the permissible exposure to sound powers that are considered damaging to hearing.  As a rule of thumb, 85 dBA is around where most people feel the need to raise their voice in a conversation.  If you spend your day having to raise your voice to be heard over something that's running, you probably need to be wearing hearing protection.
Notice that for a 3 dB increase or decrease in the dBA level the time halves or doubles respectively.  If you look at the right column, you'll see a table saw comes in at 105 dBA.  The chart stops at 100, so what's safe?  103 dBA would cut that to 7-1/2 minutes and 106 dBa would cut it to 3-3/4 minutes (3:45).  You shouldn't run a table saw for more than that in a day without hearing protection.

Impulse noise, like that from a gun, is different and seems to affect hearing differently, causing a loss of high frequency hearing faster than continuous noise does.   Since noise levels for everything past a .22 rifle (130 dBA) is in the 150 to 155 range, hearing protection is absolutely required - but you knew that.  If putting a suppressor on a gun drops 155 to below 130, by everything I can read, you should still wear hearing pro. I'm unable to find anything that says that suppressors do anything more for hearing than simply changing the dBA level of the shot; that is, I see nothing that shows that modifying the shape of the noise impulse helps.  You will read that some Fed.gov agency said that if the crack of the gunshot impulse noise is less than 140 dBA that hearing protection is not needed.

How does the App work?  You can simply open it up, and there are help screens accessed by tapping on "?" on the page.  Sitting here typing, with the phone's microphone pointed at my keyboard, typing puts the sound levels into the mid 50s to over 60dBA, which is pretty quiet.  When I stop typing, the noise level drops to the around 40.  When the air conditioner starts, that goes up by 3 dB.  Proximity to the microphone is important, so they say the SLM is accurate when it's a meter away (call it one yard) from the source.  The display responds to things like hitting one key on the keyboard, but whether it will give accurate readings on gunshots is a question that has to wait.