I think that of the stupid and illogical restrictions passed in the National Firearms Act of 1934, the most illogical is the restrictions on silencers, which obviously aren't even firearms.  It's a silly requirement that imposes a $200 tax that was crippling when it was enacted, but has dropped in impact as our currency is inflated away.  In 1934, $200 was many times the cost of a gun; today, $200 is close to the price of the lowest cost guns but a fraction of the cost of higher end handguns.  Today, the application process and delays seem to be the most significant hindrance to widespread use of silencers.  Hopefully, the Hearing Protection Act can remove those false hardships.

Hat tip to No Layers - Only Guns and Money for the heads' up warning he posted about the campaign against the Act starting in earnest.  He reports receiving the following email: 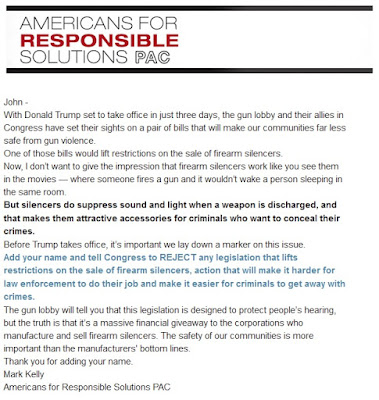 The problems with this, of course, only start with the fact that while it's technically correct to say "silencers do suppress sound and light", that's what they're designed to do, the rest of the email is just the usual fear mongering.  They don't back up the claim that silencers are attractive to criminals, and they don't describe the actual changes silencers cause, which while helpful are actually pretty minimal.  They're appealing to the ignorant whose only knowledge of silencers is from far too many movies that show a silencer reducing the roughly 160 dBa sound of a .45 handgun down to a soft, puffing "pfft" sound.  In reality, instead of the 80 dB noise reduction that movie sound implies the actual reduction is around 30 dB or what your typical hearing protection provides, which reduces the sound of a .45 cal handgun down to a loud blast on a trumpet or a loud passage in a stadium rock concert. Yeah, it's quieter but it's still pretty darned loud.

Put it this way: it reduces the sound out of a .45 handgun to the sound of a .22 rifle.  I think everyone still wears ear protection around .22 rifles today.

John Richardson writing at No Lawyers puts it this way:


Having reported on hundreds of defensive gun uses on the Polite Society Podcast I have yet to come across mention of a criminal having a suppressor in his or her possession while committing an assault, robbery, home invasion, or murder. Indeed, more often than not, these miscreants use the loud sound of a firearm discharge to attempt to cow their victims.

The references to the ebil debil "gun lobby" and "corporations who manufacture and sell firearm silencers" tell you what they're really all about: just restricting the rights of gun owners for no valid reason, and thinking we're all just brain dead zombies who do whatever the "gun lobby" or double un-good NRA tell us to do.

Disclaimer and technical tangent: after a career in RF engineering, decibels are second nature to me, and while guys are fussing and "dB chasing" in silencers, making a huge deal over differences of a single digit in noise reduction, like from 31 to 32 dB, and companies are selling different models by stating attenuation to tenths of a dB, It Doesn't Matter.  Audio has a lot of counterintuitive stuff to it, and one of them is that while the dB scales that audio guys use correlates with Sound Pressure Level and other lab-type measurements, how loud a sound is perceived to be follows different rules.  You're entering the field of pyschoacoustics, and it's filled with all sorts of unexpected things.  For one, the perceived loudness of a sound depends on its frequency.  Another, while the difference in measured sound pressure doubles for a 3 dB increase in sound level, if you give someone a volume control and tell them to increase the power until the sound is twice as loud, they don't increase it 3 dB, they increase it closer to 10 dB.  In other words, if you're shopping for a silencer and they tell you one is good for 131.3 dB and another is good for 130.8 dB, no one will ever tell them apart in use.