Getting my Fogbuster system running was really easy once all the parts were here.  I had been afraid there were going to be some surprises out of thin air, and the system was going to cost me quite a bit more than it seemed, like much of this project.  I lucked out in a couple of places, though, the big one being that the most important part of the system, the California Air Tools compressor happened to have been on sale at Home Depot a couple of weeks ago.  It was only 10% off that price but almost $100 less than Tormach gets.   The small Fogbuster system was also cheaper at Little Machine Shop than Tormach's price, too.  Those two items, and a gallon of water-soluble cooling fluid were all it took to get running.  Along with the couple of pieces of scrap wood I showed a couple of days ago.

The system was easy to get running and I did that yesterday after the cooling fluid arrived.  Measure out a quart of water, add an ounce of coolant to it and finagle a funnel to get it into the container.  Flip on the compressor, wait till it shuts off and then turn on the air line to the sprayer head.  The compressor cycles on and off, but it doesn't really add to the din in the shop.  I'm really happy I got that compressor, if I'm going to have to live with it cycling next to me.

The only difficulty I had was figuring "now what?"  How do I show that it makes a difference?  A meaningful test would be to make a cut I couldn't make before and see if this made it possible.  Have you ever seen CNC videos where they cut a piece of metal and it glows hot, even under flood cooling?  Nah.  Nothing like that.

What I did was take a cut I'd done the day before as two passes and cut it full depth in one pass.  "Full depth" is the 3/16 thickness of the 1018 cold rolled steel.  This is the piece of 3/16 CRS I mentioned  cutting off too short and made the replacement for over the weekend.  Then I doubled the feed to make it even harder on everything.  No problem.  I could feel the machine working harder, but nothing went wrong.

In this picture, you can see the mist droplets from the Fogbuster spray on the spindle and my vise.  If you look around the area between the spindle and the black folded cover, you'll see some light specks in the air.  That's the coolant.  It's hard to see; a darker background would help.  Fogbuster has some pictures on their website that demonstrate how it works. 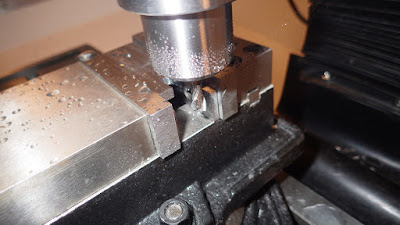 My few hours of messing around only used about half a cup of coolant (rough guess, obviously).  As a bonus, I realized there's nothing to keep me from using it on the lathe.  I can move everything the few feet over to the lathe with no interruption.

The other thing I worked on in the last two weeks was chasing a hard-to-eliminate oil leak from my oil pumping system.  The leak went from being a puddle on the floor to a "that's funny... wasn't that there yesterday?" puddle to a few ounces in bucket.  For the last week, it has been down to dripping about 3 or 4 drops in 24 hours onto a paper towel.  I had seen clues that it might be from the push to connect fittings I used and finally resolved to replace those with barb fittings that the tubes push onto.   The leak isn't really bad, but it shouldn't be there.  I'll find out in the next day or two if the fix worked.