SEIU Is a Corrupt Bunch of Thugs

And in other news, water is wet and fire will burn.

Back on March 30th, the Daily Signal ran a story about Patricia Johansen of Minnesota who worked as a care giver for her two special-needs grandchildren.  This must have been something other than grandmotherly concern because she was getting paid by someone, apparently the state's Medicaid office, because she recently found that her paycheck was being reduced to pay union dues.


Since she never agreed to join the union that represents such Medicaid-eligible caregivers in Minnesota, Johansen was surprised to discover that union dues had been deducted from her benefit check for about four months.

In an affidavit, the Fergus Falls resident says she is convinced the union, SEIU Healthcare Minnesota, forged her signature so it could start deducting the dues.

Here it turns into the kind of story you would think it is, involving a political appointee by Democratic Gov. Mark Dayton; an appointee who's accused of conducting this fraud, as well as “fraudulent signatures, nonexistent voters, and ballot tampering” in a 2014 unionization election.  They're going to get right on it.  Honest.

In the wake of the 3/30 article, people started contacting the Daily Signal to report they also had their signatures forged by the SEIU, in various parts of the country.


Dear Daily Signal: I live on the South Shore in Massachusetts, and the same thing happened to me. I was a personal care assistant for a number of years for a young boy, Joey, and was paid by Cerebral Palsy of Massachusetts.

The union began taking money out of my paycheck. I made several calls to complain about it and got nowhere. I even called my state senator, and that got me nowhere. This is Massachusetts, of course.

The one that stands out is the guy claiming to have been an SEIU officer fighting this kind of corruption.


Dear Daily Signal: I’m an activist and organizer who worked for a short time, from October to December 2012, as lead organizer for SEIU United Long Term Care Workers, which, pre-scandal, was called SEIU 6434 in California. The local was in the middle of a huge leadership corruption scandal when I was hired with the charge of bringing the union back to the workers.

I was fired after a few months when I brought up these very concerns ...

To echo what I said at the top, next thing you know they're going to tell us water will wet us and fire will burn.  It's not just that SEIU is a bunch of lawless thugs, this particular scam isn't new.  I wrote about a case in Michigan back in 2011.  I suppose, though, it's illustrative that it's still going on.  Things like this are part of the structural reasons we're headed for economic collapse; the SEIU donates money to Democrat politicians, when they get elected, they pass laws or appoint the right people to carry out operations like these that transfer taxpayer money back to the SEIU.  It's the closest thing to a perpetual motion machine you'll see.  SEIU gives dues money to Democrats, Democrats give taxpayer money to the SEIU, who give part of the taxpayer money back to the Democrats, and on it goes.  No one ever gets punished, no one ever gets in trouble, the machine just keeps spinning. 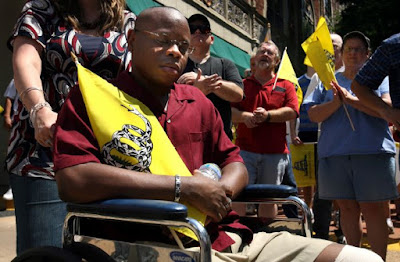 Remember back during the days of TEA Party protests, when the SEIU thugs beat down Kenneth Gladney for selling Tee shirts, and then got away with it in St. Louis courts?