I Think I Have An Answer to my Info Bleg

Back in January, I did a totally self-serving post asking for help in learning about long range rifle shooting.  In the intervening few months, I've shot all three of the guns that I think of as contenders and I think I know the one to use going forward: my Savage Scout Rifle.  All of them shoot well on the ranges I've had access to (out to 200 yards), but the Savage has the best trigger.  It's not their "Accutrigger" (I think it predates that design), it's just a nice, light trigger.  At the moment, I can't measure it, but I think there might be something I can hack to do it.  The disadvantage to this platform is that it has the typical, low power scout rifle scope.  I believe it's a 2x; to these eyes, it feels like the only advantage over iron sights is that crosshairs are nicer.   On the other hand, it's basically a Savage model 10 so I'd imagine there are ways to put a more conventional scope on it.

Pardon the craptastic picture, but this is two of the Savage's four round magazines.  The only two I tried. 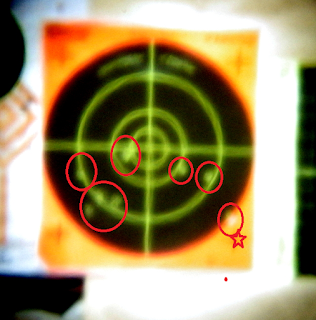 That's a Caldwell target, 12" diameter.  The shot marked with a star is the Diminutive But Deadly one's only shot.  My best group is probably around an inch to 1-1/2" in diameter.  (mumble..mumble, each hole is. 0.3 in diameter, looks like another shot could fit between each two, call it 0.9", right angles triangle...1-1/4"on the long side...0.6 MOA...maybe loosen all those numbers a bit)

If the spring runs as the winter did (that is, warmer and drier than average), we have no more than six weeks and probably four of what I consider our best time of the year to be outdoors and getting to the ranges, so I probably won't get many more chances to work on things.  Still, this leaves me with a better starting point for next season - along with whatever reading and mods I do.  The high today was around 80 or 82.  Frequently, by mid-May (four weeks) that number goes up to the lower 90s.  I may have remarked here that the seasons in Florida are opposite of the rest of the nation.  Most of you put up with winter to get a great spring through fall; we put up with summer (and a half on each end) to get a better winter.  Most of you are having April showers: this is our dry season before the summer monsoon season starts.