My Pics of the Weekend

As I mentioned Thursday, this weekend was an airshow here in the Silicon Swamp.  The show featured the Air Force Thunderbirds, as well as an aerobatic team from France, the Patrouille de France (warning: that's in French), a touring B-25 called "Panchito", a visit from a couple of F-35s, and more.  As I mentioned, I wanted to photograph this from my backyard.  I live a few miles north of the main airstrip, and exactly where they fly depends on weather to some degree.  This time of year, our prevailing winds are out of the east and it tends to be breezy:15-20 mph is normal.  Wind direction varied over the weekend, and the action never got as close to us as the Blue Angels did back in '15.

There's a guy who lives around here who is kind of famous and got a guest ride in one of their F-16s.  The Thunderbirds took Buzz Aldrin up for a ride separately from the show. 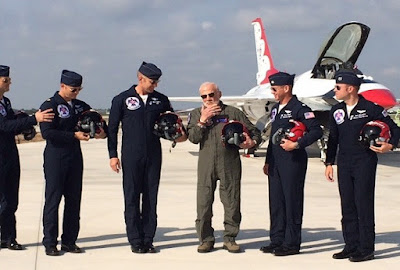 (News13 Image)  At 87, Buzz is the oldest guy to ever ride in a Thunderbird, but that's not much in the way of "history making" for Buzz Aldrin.

Trying to photograph something like this involves grabbing every shot I can and then throwing most of them out.  Anything with too much motion blur is gone.  Exposure issues can be worked in a photo editor (I don't use Photoshop, I use the open-source GIMP).  Details on the camera, and all below.  Here are my favorites of the weekend, with no particular order. 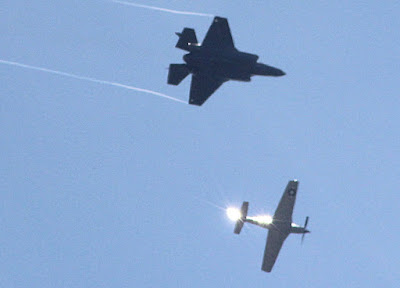 An F-35 does a flyby pattern a few times with P-51 Mustang, shot Saturday.  They call this a heritage shot. 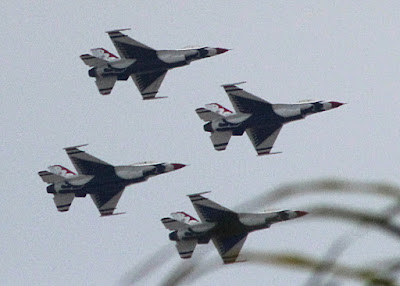 A group of four of the Thunderbirds passing behind the top of a palm tree, shot today. 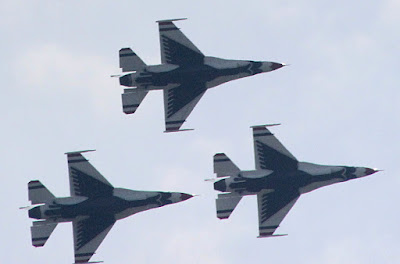 A different angle of three of the four on a different pass, also today. 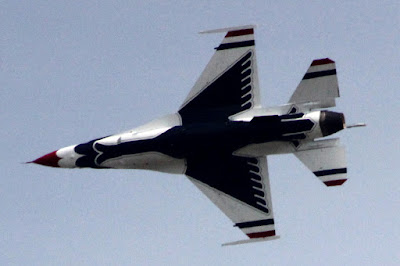 One of the beasts turned its belly at me, yesterday. 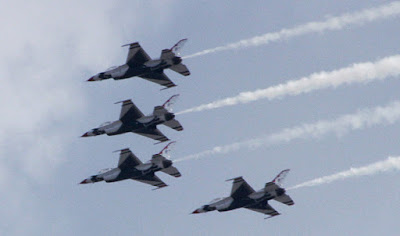 The main group heading for another pass down the landing strip with their smoke generators on, shot on Friday.

All four of these were shot in the same basic way: handheld, catching them as I can.  No tripod.  My camera is a Canon T3i, which I got in 2012, so it was already an old model DSLR at that time.  It's an 18 MP camera, with a small sensor (APS-C) sized.  My lens is a low-end Sigma 70-300 zoom.  I prefocus the lens at infinity, leave the zoom at 300mm and shoot aperture priority with f16 or f22 for the aperture.  I set ISO to 800 or 1600, to keep shutter speed close to 1/1500 or faster.  Most lenses are better at smaller aperture than wide open, so this helps get the most out of it.  The APS-C lenses "see" a smaller portion of the exit pupil out of the lens, so they act like they're longer focal length/higher magnification than they would on a "full frame" (35mm sized) sensor (which was 24 x 36mm).  It makes my 300mm lens look like 480mm to a 35mm sensor.  That's a lot of magnification.

All of these are shot as jpegs, 3456 x 2304 out of the camera.  In GIMP, I crop them, typically scale a bit for the monitor size, and adjust exposure.  All of these have a touch of unsharp masking applied.