If you think that getting Bill O'Reilly wasn't the target of an intentional hit job to get him off the air, I have some choice Florida beach land to sell you. O'Reilly has been consistently gotten the best prime time ratings on cable news channels for as long as I can remember.  He has been on top since '02 or '03; do you think they're going to dump without extreme pressure?

I don't think this bodes well for the future of our ability to get anything other than statist propaganda.

If anything should have been abundantly clear since the Trumpening, if not years before this past November, it's that left will not tolerate free speech.  They will not tolerate the presentation of ideas that don't fit their totalitarian agendas.  There's an entire infrastructure that has been formed to fight Fox News Channel; David Brock's Media Matters, well backed by George Soros and his many organizations, is just one example.  Media Matters made a guy named Angelo Carusone their president.  Carusone had previously run the Stop Beck campaign and specialized in convincing advertisers to drop their sponsorship of people hated by the left.


Carusone, the president of liberal media watchdog Media Matters for America, is one of the main organizers of the #StopOReilly campaign, which is pressuring businesses to pull their ads from “The O’Reilly Factor” in light of sexual harassment allegations against the popular Fox News host.

He also was the organizer of Media Matters’ successful campaign against former Fox News host Glenn Beck, and another campaign that succeeded in needling Rush Limbaugh.

More details at Politico.  Carusone is very upfront about it and takes pride in bringing down opposing voices.  In the Village Voice (not your "vast right wing conspiracy" kind of place), he boasts:


I started it on July 2nd, 2009, during the summer between by second and third year of law school. For me, it was an interesting time. I was in law school, getting an info dump. I was trying to figure out what I was going to do, and for me, it became clear that things were pretty messed up. Our policies are messed up, and didn't think the conversation around them was going well. I started looking at the irresponsible, reckless pillars of the media. Beck represented the worst of them at the time. He was extremely reckless, and illustrated the very worst of the media abdicating their responsibility. That's why I picked him as a first target....

At the risk of belaboring the point a bit too much, he later brags about damaging Rush Limbaugh after the incident where he called Sandra Fluke a "slut".  You'll recall she was a college student/Democratic operative that wanted free contraceptives, and said something like $3000 a year wasn't enough for her contraceptive expenses.

With the firing of Roger Ailes over similar sexual harassment claims last summer, it's possible that the magic formulas that made Fox successful have all been destroyed.  If not, the defacto control of the network going over to Rupert Murdoch's son, James, probably marks the beginning of the end for the news outlet.  Glenn Beck puts it this way,


“You better make a decision, America. Because you’re about to lose a big conservative ally and voice. And it’s not just Bill O’Reilly. I’m telling you, Sean Hannity will be next. Then Tucker Carlson will be next. Until everyone complies with what they say is not misinformation, they will continue to go. And once you have the big bear of Fox News out of the way, then they come for TheBlaze. Then they come for The Daily Wire. Then they come for all of us,” Glenn said.
....
So Roger Ailes, like him, hate him, let’s know him for who we think he is — no matter what, he built a ship that was not going to be sunk. Rupert Murdoch was part of that. But Rupert Murdoch has children and wives — lots of them — that hate the Fox News Channel. They are embarrassed by the Fox News Channel. They’re not conservatives by any stretch of the imagination.

And the big thing when I was there was, as soon as Rupert is gone, the kids are going to take over Fox News and they’re just going to clean house and stop this nonsense.

In the Hollywood Reporter piece, James Murdoch is not in the least bit trying to disguise or hide the message that he wants to kill Fox News as we know it.


[S]ources say James Murdoch’s longtime annoyance if not disgust with Fox News became cold fury after the Times' April 1 story — even though several of the O’Reilly settlements had happened when James was CEO of the parent company.
...
Fox News is a business he should not be in, he had told people before, despite its major contribution to 21st Century Fox's bottom line — 20 percent of its profits came from Fox News last year, the biggest-earning division in the company. Presumably, he meant the in-your-face world of conservative cable news with its mega personalities. Indeed, James regarded many of the people at Fox News as thuggish Neanderthals and said he was embarrassed to be in the same company with them.
...
“Fox [News] is an important brand, but it needs to develop, and, to some extent, be reformed,” James said when I interviewed him 10 years ago...

"Be reformed"?  I would argue that has started already.  Obama spokes droid Marie Harf has been a regular voice as a "Fox News Contributor", adamantly defending everything the Obamanoids did in the last 8 years.  Other in-your-face Democrat spokes droids have also joined the staff.

I have to say that I never particularly liked Bill O'Reilly; to me, he came across as too egotistical; he always had to carve out a niche on every issue so that he could be better than everyone.  I couldn't tell you the last time I watched one of his shows, although I might have seen a minute now and then.  I also have to say that it has been a long time since I thought Fox espoused real constitutionalist views; the occasional host will, but if it's anything, it's mostly GOP TV.  On the other hand, because it had conservative, libertarian and other real alternative voices far more often than any other network, it has been the channel I tended to leave the TV on.  If James Murdoch continues and turns it into another CNN, we may as well just leave the box off.  If everyone sounds the same, it becomes much harder to stay informed.

I keep hearing the death of cable TV being talked about.  This is probably another milepost along the way. 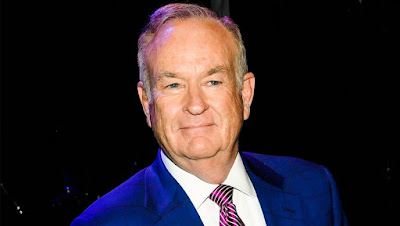