Regular readers know that I've been pushing the idea of killing off regulations, and putting a sunset date (expiration date) on all new Federal regulations.  Early on, and at the start of his administration, President Trump said he was going to require that agencies delete two old regulations for every new one.

How can we tell if it's happening?   For one thing, I'd expect the pace of new regulations to be declining.  That seems like it should be one outcome.  The other aspect, deleting two for every new one, seems harder to quantify.

Back in January, I grabbed this screen save from our old stomping grounds, Regulations.gov. 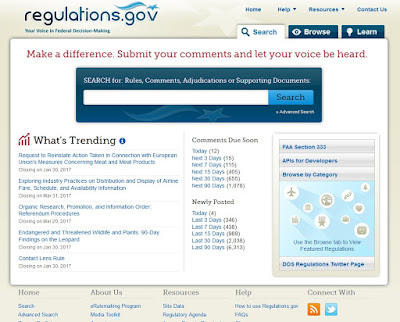 The file was saved on inauguration day, January 20th.  Notice the number posted in the last 90 days of Obama's administration was 6313 new regulations.

This weekend was, of course, the 100 day benchmark, so it was a natural day to compare. 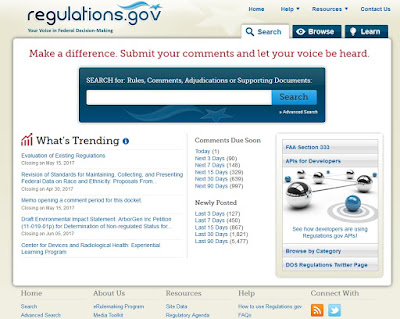 The first time I posted about visiting Regulations.gov was in March of 2012, so just over five years ago.   While I neglected to write the real numbers down for every visit, a search for regulations.gov in this blog's search engine (upper left of the page) shows that during the Obama years the number was approximately 6000 regulations every 90 days (every quarter).  That corresponds to 24,000 per year and 192,000 regulations during his eight years.  That's an estimate pulled from a PFA average based on infrequent visits to the website.  The highest number I ever saw was in September of 2012, between Benghazi and the election, when 6417 were posted.  Maybe they were trying to get a bunch more regulations put in place in case they got a new boss who sends them home?

I'm reminded of the old joke, "What do you call a thousand lawyers on the bottom of the sea? ... A good start".  In this case, that's the answer to "what do you call 13% fewer regulations in 90 days".   It's a good start.  I'd like to figure out how many regulations are being deleted because I think that could be the big story.

For quite some time, the most popular post I had on this blog was a long 2010 post about the consequences of regulations growing like weeds.  I wrote then:


Although the legislators and regulators never consider this, every regulation consumes some amount of time and money to comply with.  The new Finance Reform [reference to Dodd-Frank - SiG] bill has been estimated to required the development of 250-300 new regulations.  Every regulation slows down, hinders and costs every honest business real money.  Despite the widespread talk of corrupt CEOs and general lack of corporate ethics, I've been working in the manufacturing industry since the mid 1970s, and every company has had an active, if not aggressive, ethics compliance program with requirements for training and seminars every year.  There are exceptions but most companies do their best to be honest and law-abiding.  Government seems to think it's mere coincidence that countries with lower tax rates and lower regulation attract business, and they demonize companies for moving to countries where the environment is better.
...
Regulation and litigation are sand in the gears of society. Big, sharp, 40 grit silicon carbide abrasive particles that grind the gears and shafts away. [Emphasis added - SiG]

Thanks to his non-government background, Trump has a very good feel for the impacts of excessive regulations.  If he can reduce the burden and expense of these regulations he could leave a lasting legacy.   It's a good start. 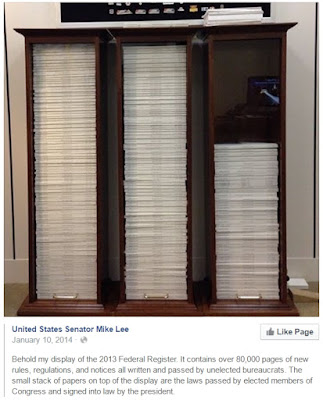 Photo by Senator Mike Lee.  The 2-1/2 columns of stacked paper are over 80,000 pages of new Federal regulations passed in 2013.  On the top of the case, the small pile of papers is the actual laws passed by congress.