The perpetually concerned are talking about the world being on the precipice of WWIII with the goings on with Putin about Syria, the dispatch of the Carl Vinson to patrol off Korea and China putting 150,000 troops on the border with North Korea.

While it could be, I suspect that we have a ways to go yet, and exits from that highway still remain, barring any black swan moments that change everything.  Have we had our Archduke Ferdinand moment already, and we didn't notice it?  I've heard the actual Archduke Ferdinand moment wasn't thought of as a harbinger of doom when it happened, either.

I have to admit that I'm puzzled about the real relationship between China and the Norks.  While lots of people say that L'il Kim doesn't take a dump with Chinese approval, I wonder if China doesn't see him as problem; a liability.  Perhaps he has his uses, he can do totally insane shit and they can watch our reactions to it, but it has to be apparent to the Chicoms as well as the whole world that he's FN.

The pessimistic, paranoid way of looking at the situation is that China put their troops there in case we did something to North Korea.  The argument is that the Korean War (which had plenty of Chinese troops in it) never ended; there has just been a long ceasefire.  There has been talk of us preemptively striking Pyongyang if we "knew" they had put a nuke on an ICBM and were in position to strike us.  If we were to strike Pyongyang, China could claim their interest is to stabilize this country on their southern border and are only acting out of "humanitarian concern".  That could potentially put Chinese and American forces shooting at each other.

On the other hand, Zerohedge reports something more along the lines of what I was thinking: if he gets too FN, China will take Kim out themselves.  China knows North Korea is on the verge of a very big nuclear test, likely on or about the 15th, and is telling Kim that if they cause any trouble, the Chinese will wipe out North Korea's nuclear program themselves.


The editorial in the military-focused Global Times tabloid, owned and operated by the Communist Party's People's Daily newspaper, said that North Korea’s nuclear activities must not jeopardize northeastern China, and that if the North impacts China with its illicit nuclear tests through either "nuclear leakage or pollution", then China will respond with force.


“China has a bottom line that it will protect at all costs, that is, the security and stability of northeast China... If the bottom line is touched, China will employ all means available including the military means to strike back. By that time, it is not an issue of discussion whether China acquiesces in the US’ blows, but the Chinese People’s Liberation Army (PLA) will launch attacks to DPRK nuclear facilities on its own."

This is "one of those stories": shortly after publication, It seems to have been retracted without explanation, the URL now returning a "404" error.  Not before the original article was cached on a webpage owned by China Military, courtesy of google (which is worth your time to read).

Trial attorneys are known for  sometimes saying something they can't substantiate in court.  When the opposition objects and the quote is taken out of the reporter's notes, it can not be taken out of jurors minds.  Google is even better.  This could have been floated by the Chinese, long enough to be sure Google would cache it, and then taken away.

I know that one of the two ways North Koreans can escape the "hermit kingdom" is to flee north into China.  China generally returns them to the Norks, who generally torture them and any family they have to death.  I don't think the population of North Korea would be difficult for China to absorb, but I have no idea what ethnic feelings they may have toward each other.   From an economic standpoint, South Korea is a bit of a competitor to China, although a distant 11th place in the world GDP rankings compared to China at #2; China is tremendously larger country. I could see China not wanting a unified Korean peninsula if it was an economic competitor.

Back to Zerohedge's summary of the Global Times piece for an interesting conclusion:


The report also said that "the DPRK must not fall into the turmoil to send a large number of refugees, it is not allowed to have a government that is hostile against China on the other side of the Yalu River, and the US military must not push forward its forces to the Yalu River.” It notes that "this sentence is meant for the United States, because the premise of it is that the US military has launched attacks to the DPRK."

But what may be the most notable part of the oped is the mention in the Global Times editorial that North Korea will not be "not allowed to have a government that is hostile against China on the other side of the Yalu River."  This implies that if and when the US initiate strikes on NK, the Chinese PLA will likely send out troops "to lay the foundation" for a favorable post-war situation.

In other words, China may be just waiting for Trump to "decapitate" the North Korean regime, to pounce and immediately fill the power vacuum.

It makes me wonder if Trump and China's President Xi discussed this last weekend.  Comments from anyone with good, in-depth knowledge of the area are appreciated, as always. 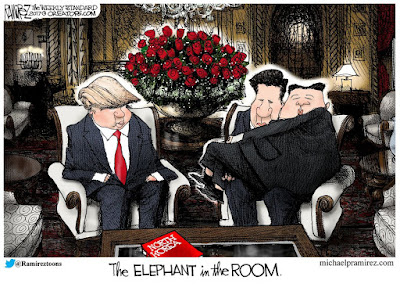