From the Foundation for Economic Education, author Marian Tupy got motivated by a quote from Twit of the Year, Alexandria Occasionally Coherent, to compare food prices after a century of largely free market forces working in American agriculture.   It was the famous quote in which she babbled:


Capitalism is an ideology of capital—the most important thing is the concentration of capital and to seek and maximize profit... we’re reckoning with the consequences of putting profit above everything else in society. And what that means is people can’t afford to live.

“Capitalism is irredeemable,” she concluded.

I'm not sure if this is the talk where she said unemployment was low because everyone had two jobs.

I'm not sure how obvious this is, but it's tricky to try to compare prices from a hundred years apart.  We know, for example, that inflation has decimated the dollar, but that's hard to separate from that other price trends.  Appliances and electronics have gotten cheaper, for example, but everything where the market has been broken by the government has gotten more expensive; things like education and health care, and then products that are highly regulated, such as automobiles, homes and aircraft.  A 2019 car might cost far more than a 1969 car, but it has been regulated extensively in terms of gas mileage, crash safety, and a host of other things.

His bottom line conclusion is that food in America has become almost eight times cheaper relative to unskilled labor over the last 100 years.

Here's what he did.  First, he obtained a report called:


Retail Prices, 1913 to December 1919: Bulletin of the United States Bureau of Labor Statistics, No. 270, which was published in 1921. On pages 176-183, we encounter nominal prices of 42 food items—ranging from a pound of sirloin steak to a dozen oranges—as registered in the city of Detroit in 1919. Those can be seen in the second column of the attached graphic. 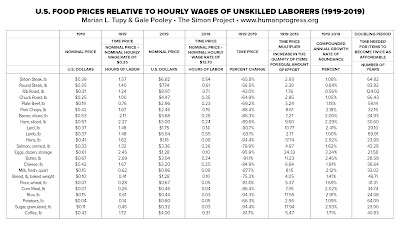 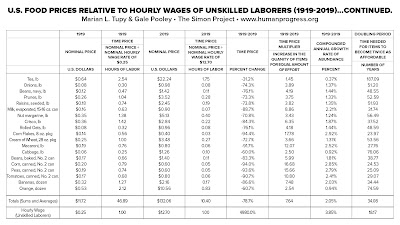 Their conclusions:
I know that "Big Ag" gets its criticisms around the web, Bayou Renaissance Man ran one just nine days ago, but the results of this century long change in agriculture has led to quality of life improvements for all of us, here measured by the poorest among us.  Add in that American agriculture has brought food as foreign aid to many places around the world.  An average time price decline of 79% is a big improvement in life.  It means, picking one item from the second chart, that a pound of sliced ham went from costing 2.27 hours (2 hours, 16.2 minutes) in 1919 to costing 0.24 hours (14.4 minutes), so a full two hours of pay is freed.  It means that there's more money at the end of the week for other things.

What "factory farms" buy us consumers is the "Iron Law of Production", which says that as quantity doubles, price comes down by roughly 25 to 30%.  Larger farms can economically justify techniques that smaller farms can't.  Yes, I'm aware of the general protests against living conditions for livestock on these farms, and I'm sympathetic to some of it, but I see that as a first world problem.  Look at it this way: if you were a starving Venezuelan eating out of garbage can, because there are no zoo animals or pets left, do you eat the "factory farmed" ham or do you keep starving?   I think modern small farm techniques for raising livestock more humanely while keeping total costs down have a lot of room in the market.

That's getting lost in the weeds, though.  The bottom line is that the system AOC loves to hate has done very well for Americans, while the system she loves produces Venezuelans eating out of garbage cans.  Her quote that "...people can’t afford to live," due to capitalism is proven, demonstrably false.  People today have it much better than they did a hundred years ago.

I think author Marian Tupy hits it out of the park with his closing quote:


Joseph Schumpeter, the famous economist who served as Austrian minister of finance in 1919, observed that the


capitalist engine is first and last an engine of mass production which unavoidably also means production for the masses … It is the cheap cloth, the cheap cotton and rayon fabric, boots, motorcars and so on that are the typical achievements of capitalist production, and not as a rule improvements that would mean much to the rich man. Queen Elizabeth owned silk stockings. The capitalist achievement does not typically consist in providing more silk stockings for queens but in bringing them within reach of factory girls.

To those silk stockings we can now add food. 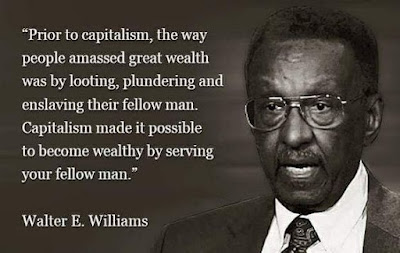