Frankly, this article shocked me, but according to a news article from Machine Design, NASA and the Lawrence Livermore National Laboratory will soon be opening some lunar samples that have not been touched since Apollo 17 at the very end of 1972.  The samples were sealed while on the moon to keep them "vacuum packed" and have never been opened.


Nine “special samples” were collected during the Apollo 15, 16, and 17 missions and stored in containers with indium knife-edge seals to maintain a lunar-like vacuum. Apollo mission planners devised these special sample containers to meticulously preserve fragile and transitory sample characteristics (e.g., solar wind volatiles and volatile coatings). Three of these samples have remained sealed in their original Apollo containers until today.

Cosmochemists at Lawrence Livermore National Laboratory will get a chance to analyze these Apollo 17 relics to study the geologic history of the site where the rocks were collected, a geologic cold trap where water may have been able to freeze. This marks the first time a sample will be studied in detail since the end of the Apollo program.

The surface of the moon is covered by a fine, powdery, dust called regolith created by meteoritic bombardment of the Moon’s surface over the past 4.5 billion years.  Volatile elements, such as those from coronal mass ejections from the sun, can get trapped in the powdery regolith and the techniques for finding, identifying, and determining quantities of these volatiles have improved in the intervening 50 years.

One of the neatest aspects of this new analysis is that the guy who collected some of these samples, Geologist Harrison Schmitt, 83, will be part of the LLNL team doing the studies. 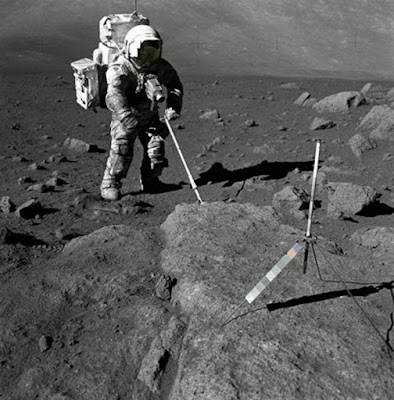 (Harrison Schmitt on the lunar surface during Apollo 17 - his only space flight.  It's only when you look at device in the right foreground that you realize you're looking at a color photograph, the scene is so monochromatic - NASA photo)


A new NASA program, the Apollo Next Generation Sample Analysis, has selected nine teams to extend the science legacy of the Apollo missions by studying pieces of the Moon that have been carefully stored and remained untouched for nearly 50 years. LLNL is part of the University of New Mexico team of scientists that will look at the vacuum-sealed samples to study both the volatile element record and the geologic history of the Apollo 17 site.

The teams were selected by NASA’s Planetary Science Div. and will be funded by the space agency’s Lunar Discovery and Exploration Program. The goal is to get the most data possible from these samples in preparation for future lunar missions anticipated in the 2020s and beyond.

LLNL will conduct the measurement of noble gasses, as well as analyze major and trace elements and chronology on large clasts. Specifically, they will determine how noble gases were modified by meteorite impacts on the regolith, define the source of hydrogen in hydrogen-bearing minerals in the regolith, and investigate the origin of meteorites that hit the Moon through its history. The group will also determine the ages of samples in the regolith using a variety of dating techniques to better understand the timing of crust formation on the Moon.

One would have to consider these specimens to be essentially priceless and irreplaceable, at least for now.  Naturally nobody is just going to pop open the vacuum container and say, "now what?"  That's going to be decided long in advance.  Before that happens, the teams will meet at NASA's Johnson Space Flight Center in Houston for planning sessions to determine the best way to open the samples to avoid contaminating them or destroying opportunities to learn something from them.