One of the Oldest Electronics Jokes Sorta Comes to Life

In the early days of my life in electronics, today's ubiquitous Light Emitting Diodes (LEDs) were not very common; in fact, they were somewhat exotic.  Every April Fools Day, someone would pass around a joke about the new invention called the Dark Emitting Diode or DED.  I guess some jokes  never die.

That's a long introduction to a story in Electronic Design magazine about a using an LED backwards to absorb light.  Light absorbing is sort of like Dark Emitting.  Sort of.  Making it either a DED or a LAD, but they start the story with "This is not an April Fools joke".


Researchers at the University of Michigan (Ann Arbor) have used an infrared light-emitting diode (IR LED) with its electrodes reversed to cool another device just nanometers away.

The reverse biased IR LED is held 55 nanometers, about 2 millionths of an inch, from the device they intend to cool. 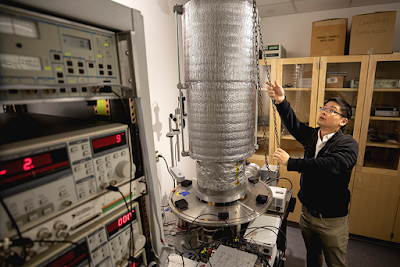 Linxiao Zhu shows the experimental platform that housed the calorimeter and photodiode. This system can damp vibrations from the room and building, steadily holding the two nanoscale objects 55 nm apart. (Source: Joseph Xu)


Reversing the positive and negative electrical connections on the IR LED makes it behave as if it’s at a cooler temperature than the ambient. The reverse connection not only keeps it from emitting light, but also can induce the LED to suppress the thermal radiation that it would be emitting.

ED makes it clear that the physics behind this is well established, and in use in other laboratory techniques.  They describe the very intricately crafted experiment that was needed to verify the effect, which depended on creating a tiny calorimeter (80 microns in diameter - .00315").  The source of heat and the LAD were separated by "a subwavelength nanometer-size gap", which is ambiguous, but earlier in the story mentioned a separation of 55nm, so assume around that.


The researchers showed that when the calorimeter and reverse-biased LED are in each other’s near-field, with a vacuum gap between them of just tens of nanometers, this evanescent cooling occurs via two mechanisms. One is photon tunneling (which enhances the transport of photons across nanoscale gaps), while the second is suppression of photon emission from the photodiode (due to a change in the chemical potential of the photons under an applied reverse bias).

So what?  One of the pernicious problems in electronics is getting rid of the heat generated in small components.  One possibility for this cooling is to have coolers built into packaged components.  I can envision photonic cooling systems being built into more complex parts, perhaps going 3D in the package, like some memory chips are now doing.  In the published Nature article, they claim heat removal of 6 Watts per square meter.  Unfortunately - that number means nothing to me in terms of how effective this solid state cooling could be at cooling practical processors, memory chips, and other components.  It sounds awfully small though.

The thing about the DED joke, though, as that in those days this would have seemed like something from Star Trek (The Original Series), like Spock himself had given it to us.  It would have been unimaginable.