Use By Date Approaching

Ran into this cartoon Tuesday and better use it before its "Use By" date gets here. 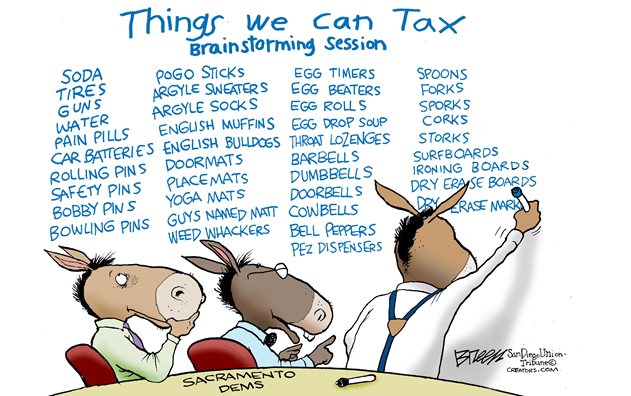 Read those as Dr. Seuss prose, it works better. Unfortunately, I was unable to find a referenced story, but the list of ideas California's state legislature is contemplating was discussed in a few places as recently as last weekend, IIRC.

I did find a couple of interesting stories that illustrate the problem.  At Town Hall, Austin Hill writes about a proposal to implement a "third income tax" to pay for education.  The existing two are their California state income tax and the Federal Income tax.


But now California, with an average statewide unemployment rate of over 12% (in some regions the rate is over 20%) and a budget deficit of somewhere between $10 and $15 billion, is considering the imposition of a third income tax. The additional income tax rate would vary, according to which region of the state one lives in, and would be imposed directly by school districts and county governments.

See, back in 1978, California voters passed a thing called "Proposition 13" which capped the amount that property tax could be raised year over year.  That means California school districts are broke just like the state.  They can't do what many other school districts in America do, and just raise property taxes by leaps and bounds every year.  Under the proposal, school districts will gain the right to decide on their own income tax levels to charge people living in their district.

Do you find it surprising that they're getting legislative support for this idea?  If so, are you considering the government employee unions, long since joined at the hip with the Democrat party would like some of that sweet taxpayer money, too?

To add a little more context, Victor Davis Hansen, writing in the Daily Signal points out a couple of things to note.


For over six years, California has had a top marginal income tax rate of 13.3%, the highest in the nation.

About 150,000 households in a state of 40 million people now pay nearly half of the total annual state income tax.

That last one is astounding.  That means 0.375% of tax payers pay half of the state's income tax revenue.  No wonder ordinary Californians keep electing the people they do.  Everything they vote for comes with the fact that someone else is paying for it.  It's OPM - Other People's Money - the most addictive substance in the world.  In addition:
It's no surprise that middle class Californians are moving out of the state.  I found it surprising that the rich are moving to California.  They're moving to the expensive cities and driving up housing prices which help force the lower income Californians out of state.

I think California is working toward the Venezuela model of having a few rich people, mostly people living on handouts, and no middle class.