Chairman Xi's Comments and the Covid-19 Virus As a Weapon

If you read LL's excellent blog Virtual Mirage, you probably came across this quote in Sunday's "What Will Happen (Sunday Sermonette)" In answer to a comment, LL wrote:


President Xi went on the record, essentially saying that it was an accidental release from their own bug factory yesterday. Some media outlets picked it up. If the White House suggests that it's an engineered product, I think that the DJI will tank and drag a lot of stocks with it.

His perspective is that the economic damages are the most frightening thing about this likely pandemic.  With the field that the Evil Party has put forward, the party is exceptionally weak. I have no faith in polls 9 months ahead of the general election.  In a year that's looking like we could see a presidential sweep along the lines of Reagan's second term, I look at the energy of the two parties.  There's little reason for Stupid Party members to go to the primaries or caucuses, yet Trump's vote total in New Hamster was a record high for an incumbent president.  Everybody is crowing about Bernie's victory in Nevada, but the numbers are pathetic.  Nevada has over 2 million adult residents over 18.  Of those 2,000,000, the early voters measured 76,000, a mere 3.8%.  A bit over 6,000, 0.3%, voted for Bernie.  In New Hampshire, a smaller state, over 120,000 people voted for Trump.

There seems to be only one thing that could threaten that reelection sweep, and that's if the Kung Flu gets really bad and it appears the CDC has completely screwed the response.  Today, the stock markets started reacting to the cases showing up in Europe (Italy, Austria, Russia) and the Mideast (Iran, Lebanon).  As a result, the major indices were down.  If China stays shut down for more months, their economy will crater and the rest of the world with it.  I'm talking not just recession but '08 levels or even worse. Then you have this swell of people wanting bigger government and wanting government to run healthcare motivated even more by fear of the virus.  (Yes, they could be mad at the CDC for not responding properly but still want the CDC to be bigger and control more!)  If people are desperate for medical care and a wild-haired socialist is promising unlimited free health care, that might attract enough voters to turn things.

On the other hand, as Larry points out, “...when you look at how many actual votes he received in Nevada, the Donkey enthusiasm even for free stuff, is very tepid.”

Today's email from FreePressers linked to an article which contained this reference:


Chinese supreme leader Xi Jinping on Feb. 14 told an emergency meeting in Beijing that a national system to control biosecurity risks was needed “to protect the people’s health.”

While not actually admitting that the deadly coronavirus that is devastating large swathes of China had escaped from one of the country’s bioresearch labs, “evidence emerged suggesting that this is exactly what happened,” Steven W. Mosher wrote in an analysis for the New York Post on Feb. 22.

That's about 8 days earlier than what LL is talking about, but signals the same idea. 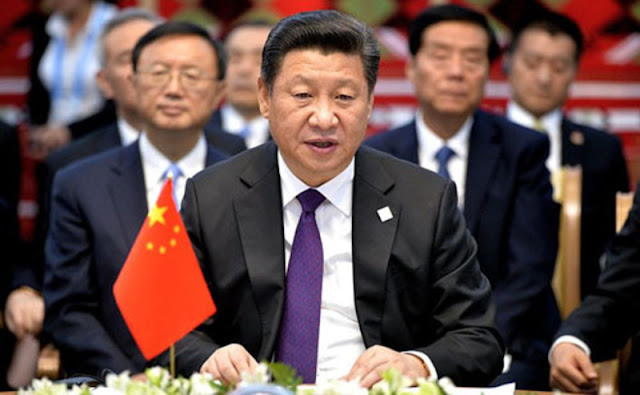 President for Life Xi at the conference where he talked about lab security as a “national security issue.”  Licensed under Wikimedia Commons N/A