Last night, SpaceX destroyed Starship prototype SN1 (serial number 1) during a liquid nitrogen fill test at their Boca Chica facility in Texas.  There had been talk that SN1 was going to take the first suborbital flight for a Starship.  I suppose it did, because it certainly lifted off and never obtained orbit, but I don't think this is what they had in mind for a mission profile.

I don't have much comment because there has been no official story on this, and this video comes from the forums on NASA Spaceflight.  That link will take you to the end of the thread, which goes back to last summer.  Currently that's page 89 and the accident seems to have happened during page 87.  There are interesting pictures of the wreckage taken this morning in daylight.

Just three days ago, on the 26th, Teslarati was excited that SN1 had been rolled to the test stand and mounted.  There is no coverage of this accident, but perhaps the fact that it happened on Friday night means the staff was off and they don't work weekends. 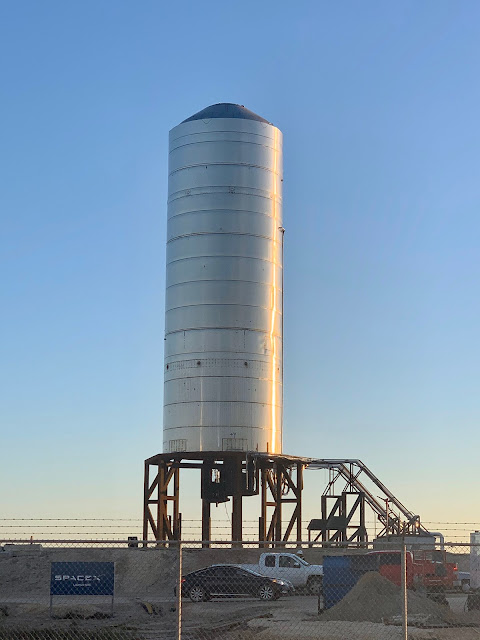 The forum at NASA Spaceflight has idle speculation on what the cause of the problem could be, but until some sort of investigation is completed, that's just speculation.   First law of breaking news applies here: the first reports are always wrong.


In totally unrelated SpaceX news, Monday's planned Falcon9 launch of a resupply cargo capsule for the ISS has been delayed until the Friday, the 6th.  The reason is pretty remarkable and the only reason a launch delay is worth mentioning.

During tests of the system that was considered ready to launch, a problem was found in the second stage.  Thanks to their aggressive launch cadence, they have plenty of hardware and chose to just replace the second stage with another that was scheduled for a Starlink internet satellite launch.


“SpaceX identified a valve motor on the second stage engine behaving not as expected and determined the safest and most expedient path to launch is to utilize the next second stage in line that was already at the Cape and ready for flight. The new second stage has already completed the same preflight inspections with all hardware behaving as expected. The updated target launch date provides the time required to complete preflight integration and final checkouts.”
NASA.gov — February 25th, 2020

Given the complexity of an orbital rocket's upper stage, it's a safe bet it takes a couple of months to build one and get it ready for flight.  To replace an upper stage and just delay a launch a few days can only mean they basically had one there on the Cape ready to fly.  NASA gets what's likely the safest scenario, replace the upper stage entirely, and SpaceX can troubleshoot this upper stage as they feel is best.