As Relativity Space continues to work toward their first orbital launch before the end of this year, the company is looking less like an aspirational idea and more like a real space hardware manufacturer.  The company got on my radar back in '19 when they successfully got to the next level of venture capital funding to develop the 3D printing processes for building the vehicles and the engines.

Make no mistake: there's a difference between having successfully printed part of a launch vehicle and putting that vehicle into orbit.  Orbit is hard.  Ars Technica reports that the company's 3D printing technology seems to be working. Two recent milestones in the development of the company's Terran 1 rocket, in fact, suggest the tech is working really well.


In an interview, Relativity CEO Tim Ellis said the company recently printed the second stage that will be used on the inaugural flight of the Terran 1 rocket, which is presently scheduled to take place before the end of 2021. The stage was printed at a rate of about 1 linear foot per day, so in printer time it took about three weeks in total to produce the 20-foot tall second stage.

"We're now confident in this build process," Ellis said. "Not only is the second stage now completed, but we're 75 percent of the way through printing the rocket's first stage."

There's a 14 second time lapse record in this video.  It appears to be a laser sintering process that operates by melting powdered metals in a continuous flow while moving the laser print head.  The process is similar to one 3D printers have been using for almost a decade. 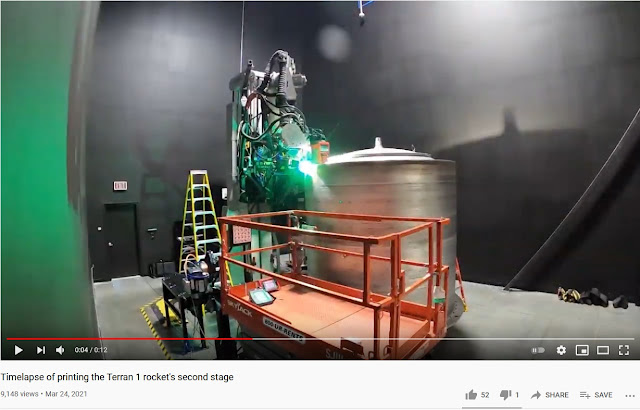 
Relativity has also been able to prove the merits of 3D printing by rapidly changing the metal used in the thrust chamber of its Aeon engine—nine of which will power the rocket's first stage. Engineers started out using a nickel-based alloy inside the thrust chamber because it was an easier material to work with during the manufacturing process. But a copper-based alloy has better conductivity and allows for higher combustion temperatures—and therefore a higher-efficiency engine.

Around the same time as these tests were taking place, Relativity secured a frankly incredible $500 million in funding. That funding will very likely not only get them through development of their Terran-1 rocket, a small sat class launch vehicle closer to Rocket Lab's Electron and not the heavier lift Falcon 9.  That funding might well get them through their next development.  Like Rocket Lab, Relativity Space has announced a program to develop a Terran R, in which R is for Reusable, that will be in the Falcon 9's payload class.

It's hard to exaggerate just how extraordinarily flexible Relativity's apparent 3D-printing process seems to be.  It's turning out to be the key technology as the company works to prepare Terran 1 for an orbital launch debut as early as later this year.

With the second stage printing complete, the company has begun installing an Aeon vacuum engine, avionics, and a separation system for the first stage. The Long Beach, California-based company intends to ship the second stage to its facilities at Stennis Space Center, in Mississippi, for testing this summer. Assuming a successful test campaign, the stage will then be moved to Florida, where it will be integrated with the first stage for launch.

The first flight will not carry a payload, and the record of companies (and nations) achieving orbit on their first attempt doesn't inspire us to spend a lot of time planning a celebration.  When asked about the chances of reaching orbit with this first flight, CEO Tim Ellis said he was confident the company would gain a lot of knowledge about the launch vehicle. "The expectation is that we're going to learn a lot," he said.  The second flight of a Terran 1 will carry a payload for NASA.