Cartoonist Gets What the Editors Don't 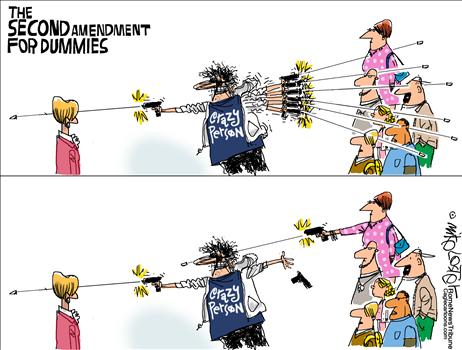 Considering that Arizona is a Constitutional Carry state, and the Bradies and other anti-gun group are always in a panty-twisted wad over "it'll be another Dodge City!...Streets will run with blood!" isn't it peculiar that there was one guy carrying (concealed) and by the time he got there a couple of other people busted a chair over the looney's head? How much suffering would have been averted if there were a couple of folks carrying concealed who could have taken out that monster?

A friend who subscribes to the Wall St. Journal sent me a link to this article on Glocks.  It has a strange feel to it, like the journalist/kids that wrote this were saying to each other, "Muffy, what's this 'Glock' thing the police are talking about?"..."I don't know, Biff, I thought it was just a 'gangsta' word.  You mean there's really such thing as a 'Glock'?"  They go on to report, hold on to your seats!, that


...their popularity stems from their reputation as being "exceptionally reliable and low-maintenance. They are good for the first-time shooter."

Speaking of people out of touch with reality, I can't resist pointing out that Ariana Huffington, founder of the Ruling Class' favorite website, "The Huffington Post" (like Hell I'm going to link to them) was kicked off an airplane for, well, acting like she's part of the ruling class.  Confidentially, Dahling, the Pilot In Command is called that because he is.  You're not.

No word on whether or not she was traveling with her dog Ruffington or her cat Fluffington or if they were escorted off the plane as well.
Posted by SiGraybeard at 9:32 PM