Has The Collapse Already Started? 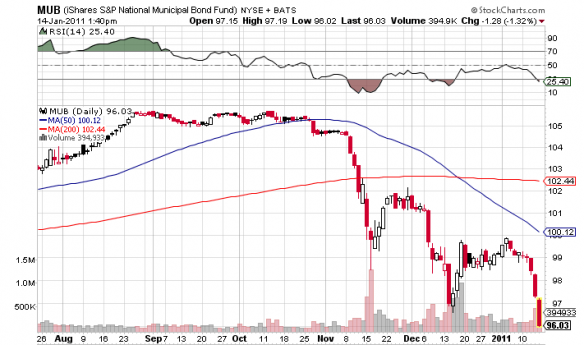 There's an apparent periodicity to the decline; you can see the prices coming back up after the mid-December bottom, but to a lower peak.  This is an impressive drop, and probably a harbinger of bigger drops.

And the comments to that article are nothing but stupid sniping about whether the stupid party or the evil party is responsible.  I'm sure after the world has collapsed, they'll still be arguing over it.

I think it's generally accepted that what will happen is that municipal debts will default, and states will start going bankrupt.  The Federal government backstops the bad debt for a while, but with debt already at 100% of GDP, that only lasts a little while, and then the Fed.gov defaults.  With the debt we have rolled up, there are essentially two options, default and inflation, aside from drastically cutting spending.  We're already trying inflation (bought gas or food lately?).  I can not imagine our congress-critters having the guts to cut spending.  Default is probably inevitable.  Business Insider ran a piece predicting this last summer.

You may look at the presentation in that Jeff Gundlach piece and say, "Why should we collapse at debt of 100% of GDP when countries like Japan or Greece have so much more debt?"  None of these places are dynamic growing economies, or places you'd like to be, I bet.  Part of why they're afloat is that we're paying for some of their needs, like the defense of much of the EU and Japan.  Donald Sensing speculated on how we can know how much debt we can sustain and concluded we'll only know after the collapse.

So has it started?  If that trend on the municipal bonds continues, I think it has.  We'll have to watch that and see what develops.
Posted by SiGraybeard at 9:01 PM