Why We Need To Throw Out Most of the CFR

While mulling over last night's posting on why we need to throw out at least 75% of the Code of Federal Regulations, and trying to think of good examples of what I mean, American Mercenary links in this posting, "Insurgency" to an article from The Heritage Foundation, "You're (Probably) a Federal Criminal" Since this is an older article, I'm going to lift a bit from it:


Federal law in particular now criminalizes entire categories of activities that the average person would never dream would land him in prison. This is an inevitable result of the fact that the criminal law is no longer restricted to punishing inherently wrongful conduct--such as murder, rape, robbery, and the like.

About 25 years ago, I had to take a company-mandated class on hazardous waste handling.  One of the highlights was the instructor stacking all of the laws on the table, about 2 feet high (it was 25 years ago) and saying, "Do you think there's not one paragraph in there you couldn't be accused of violating?"

Multiply that 2 foot stack by 100 to get today's situation in general.  Heritage resumes,


Consider small-time inventor and entrepreneur Krister Evertson, who will testify at today's hearing. Krister never had so much as a traffic ticket before he was run off the road near his mother's home in Wasilla, Alaska, by SWAT-armored federal agents in large black SUVs training automatic weapons on him.

Evertson, who had been working on clean-energy fuel cells since he was in high school, had no idea what he'd done wrong. It turned out that when he legally sold some sodium (part of his fuel-cell materials) to raise cash, he forgot to put a federally mandated safety sticker on the UPS package he sent to the lawful purchaser.
....
The good news is that a federal jury in Alaska acquitted Krister of all charges. The jurors saw through the charges and realized that Krister had done nothing wrong

So a nerdy, young inventor-guy gets pulled over by a SWAT team with hair-trigger ARs because he forgot to put a sticker on a package?  Doesn't that warrant a less aggressive response, like, perhaps, a form letter?  Back in my labor day post on whether or not we live in a police state, I said, "My definition of a police state has always been a bit nebulous.  Essentially everything is illegal, and whether you live or die is up to the police officer you are in contact with."  That's entirely the situation here.

The prosecutor apparently got a thing for Krister.  Prosecutors, you see, get graded on convictions and he wasn't going to let a small time mistake dangerous thug like this embarass him, nosiree.


The bad news, however, is that the feds apparently had it in for Krister. Federal criminal law is so broad that it gave prosecutors a convenient vehicle to use to get their man.

Two years after arresting him, the feds brought an entirely new criminal prosecution against Krister on entirely new grounds. They used the fact that before Krister moved back to Wasilla to care for his 80-year-old mother, he had safely and securely stored all of his fuel-cell materials in Salmon, Idaho.

According to the government, when Krister was in jail in Alaska due to the first unjust charges, he had "abandoned" his fuel-cell materials in Idaho. Unfortunately for Krister, federal lawmakers had included in the Resource Recovery and Conservation Act a provision making it a crime to abandon "hazardous waste." According to the trial judge, the law didn't require prosecutors to prove that Krister had intended to abandon the materials (he hadn't) or that they were waste at all--in reality, they were quite valuable and properly stored away for future use.

With such a broad law, the second jury didn't have much of a choice, and it convicted him. He spent almost two years locked up with real criminals in a federal prison. ...

This is a horrible, horrible thing.  A guy's life is shattered, he spends time in prison with real criminals because of an over-zealous prosecutor who felt embarrassed when he didn't get a conviction on his first over-zealous charges.  Not to mention that his 80 year old mother, whom he left his work to care for in the first place, was denied his care.

There's more at the Heritage link.  It's worth reading.  There are more stories out there.

This needs to be stopped.  Back to writing our congress critters.  Support those trying to tear this monstrosity apart. 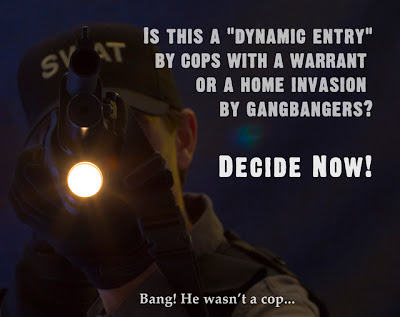