First meme:  The debt ceiling must be raised.


Addressing the possibility of the GOP-led Congress not voting to raise the debt ceiling, Austan Goolsbee, President Obama's top economic adviser, histrionically asserted this month: "This is not a game. The debt ceiling is not something to toy with. If we hit the debt ceiling, that's . . . essentially defaulting on our obligations, which is totally unprecedented in American history. The impact on the economy would be catastrophic." 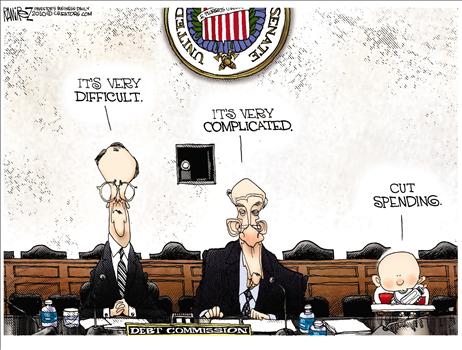 (Michael Ramirez at Townhall for Dec. 7, 2010)
I could go on for a while about how hypocritical it is for our administration to talk this way, when the president, Harry Reid, and others in the power structure criticized the previous administrations for doing what they're doing.   Art Laffer has a good summary in the WSJ.  The point is that this argument is the usual hypocritical, political BS.  Don't believe it.  You're paying attention, so you won't, but save scraps of this to show your doubting family members or neighbors.

Look: we're virtually at debt = 100% of GDP.  It's crisis time.  We're bleeding money like a chopped artery.  Stop the bleeding.

Meme 2:  the 2010 tax cuts.  There have been no tax cuts; the rates have been kept the same as they have been for the last 10 years - for many workers, these are the only income tax rates they've ever known.  In agreeing to a two year extension of the current rates, the Evil Party has set themselves up to prosper if the country fails (getting to be quite the habit with them).  This all comes to a head in time for the 2012 elections.  They're positioning themselves to destroy any chance of real growth, and then say "see, we told you the tax cuts wouldn't work, now let's tax those rich bastards!".  If, by some miracle, a recovery starts, it's all their wisdom in getting the Obama tax cuts passed in 2010.  There have been no cuts.

The media was buzzing with the term "Bush tax cuts".  I think some of the radio talking heads, like Hannity in particular, like that phrase because they want to make Bush sound... less awful (I can't say go...  guh....guh...).  They're playing right into the commies' hands.  Again, there have been no cuts.

OK, repeat after me: instead of raising the debt ceiling we can cut spending.  Good.  Now: there were no 2010 tax cuts.  Great.  Now let's go kill those memes.
Posted by SiGraybeard at 10:31 PM