Today is the kind of day we Florida natives call "Chamber of Commerce" weather.  Days like these are the reason people from the north come down here this time of year, the reason our company executives always happen to decide to visit in January or February, the reason we get visits from salesmen we see once a year around this time.  In short, fantastic.  Daybreak was about 42, but that only lasted until the sun got above the horizon; by 9 it was almost 60, and the high was around 70.  A bit breezy, but blue skies, low humidity, simply beautiful.  That can only mean one thing:

Time to go to the range.

We arrived around 11 AM and stayed till 2 PM.  Shot ARs, and dialed in the Nikon on my project rifle.  I had zero set at 25 yards, then decided the scope was too far back, so I pulled it and moved it forward to the end of the picatinny rail.  Which pretty much meant I had to zero it again, and I did so at 100 yards this time. Wasted a bit of ammo doing so, but it's hard to call anything on a day like this a waste.

I'll be the first to admit I'm not as good as I'd like to be, and I suppose few people are as good as they'd like to be.  On the other hand, I remember last April when I first tried to shoot 200 yards spending a magazine (30 rounder, yet) trying to find if I could even see an impact on a 12" diameter target.  Today, I shot a single (20 round) magazine at an 8" target and every shot was on the paper.  At least the trend is moving in the right direction.  Mrs. Graybeard joined in for her first time shooting at 200 yards, and put (guessing) 20 out of 30 on the target.  We're signed up for an Appleseed weekend next month. 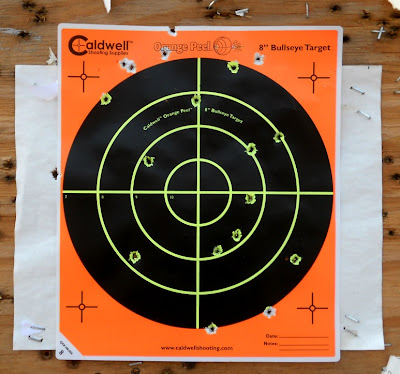 As I mentioned, it was pretty windy.  Quartering wind coming from behind my right shoulder that varied from about 10 to 20. Obviously not competition grade shooting, but that's a standard letter-sized piece of paper.  At least I'm getting better.

ASM826 over at Random Acts of Patriotism has been running a series on reloading the last few days, and was nice enough to swap some emails with me.  I'm trying to decide if reloading is really for me.  It seems the single best reason to load is to improve your ammo accuracy which sounds nice.  This ammo was "vanilla" Remington UMC .223 in 55 gr. FMJ (I saved all my brass from today).  I guess I see the advantage of slow, one-round-at-a-time loading in a single stage press, but my geek side says that I'd like a progressive press that chunks out a round with every throw of the handle, and is working on four or five at a time.  More suited to pistol ammo, I suppose.  I don't shoot any "official" competitions like IDPA, IPSC or rifle; just compete with myself trying to get better.

Reloading, though, is not for days like today.  Days like today are for getting out and staying out.
Posted by SiGraybeard at 7:10 PM