Remember those bumper stickers?  I think I've seen them in every decade of my life.  The IRS uses fear as their most important collection tool, as a matter of agency policy.  Just enter "IRS Horror stories" in your favorite search engine and you'll find plenty.  Just as the mafia is known for targeted beatings or killings to instill fear, the IRS is known for using targeted audits, subpoenas and legal instruments.  To those who don't live in the legal system; to those who fear the courts; to those who fear legal proceedings, a subpoena or other legal document from the IRS can be as intimidating as watching the mafia goon beat up a friend.

But the IRS is the mouth of the beast; the leviathan feeds this way.  And by leviathan I mean the whole nexus of big government and big banking from AIG to "The Goldman Sachs" to the Federal Reserve.  How do we get rid of it?  How can we not be devoured?

References to economic resistance are everywhere.  Baugh's "Starving The Monkeys" is the first one I heard of, and the idea has grown legs - spreading around to various places.  Gardenserf has an excellent article on "Asymmetric Economic Warfare" this week.

As for me, I'm completely in agreement with the strategy, just not completely there on the tactics.  To borrow a bit from various places, my plan is: 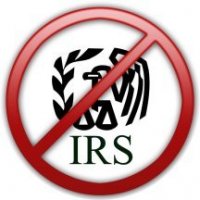