The Government Has Shut Down the Internet – Part Two

Yesterday's piece mentioned ham radio, and this will go into more depth on options. Let's start with the most common radios for the most common need. In this scenario, I'm thinking not of a TEOTWAKI or really wide scale, awful event; I'm specifically thinking about communications among protesters in an Egypt-like scenario (from what I can tell of what's going on there). Perhaps there are food riots, perhaps you need to talk to others to plan where you're going to meet, any scenario that you might use instant messaging, email or other Internet communications for.

First: the first law of security. You must assume any transmissions you make are monitored. Years ago, when cellphones were plain FM, anybody with a scanner or other radio that tuned to the cellular band - even some UHF TVs - could eavesdrop on cellular phone calls. The industry, instead of installing a dollar or two of encryption hardware in the phones, argued (and won) that the government should make it illegal for you to listen to these calls. The best analogy I can think of is two people come into your house (the radio signals certainly do) and instead of whispering or speaking in code words, get you arrested for listening to them. Don't count on anyone not listening to you because it's not polite or legal.

Practically, that means to keep your communications as brief as possible; it means lower powers are better than higher powers; and it means encryption, which will be the next topic.

Radios
For local use, the VHF or UHF (or both) HT is everywhere. I guess that more hams own small HTs than any other style of radio. There are many manufacturers, and as I noted yesterday, a decent rig will cost from the price of a few hundred rounds of FMJ 9mm up. This chart is one dealer's handy way to shop for an HT

You will note a basic single band HT can be had for $89 (about 400 rounds of 9mm FMJ today) and the top end for multi-band is around $500. Note these are new radios, not used gear. Those might start at $25. I have no connection with Gigaparts, other than having bought things from them several times.

What do I own? Currently, Mrs. Graybeard and I each carry a Yaesu VX-6R (our other everyday carry). The combination of features vs. price hits a sweet spot for me, but it may not be right for you. This radio receives everything from the AM Broadcast Band (500 kHz) up to 1 GHz, with the exception of the (hardly used) old US AMPS cellular band at around 925 MHz (the result of that law I mentioned above). This allows the same handheld to be used for shortwave or AM listening, FM broadcast, aviation (should you need that) and two way communications on 144-148 MHz (2 meters), 222-225 MHz (US version) and 420-450 MHz (70 cm) bands. It also allows use of that front LED as a nifty emergency flashlight, too! 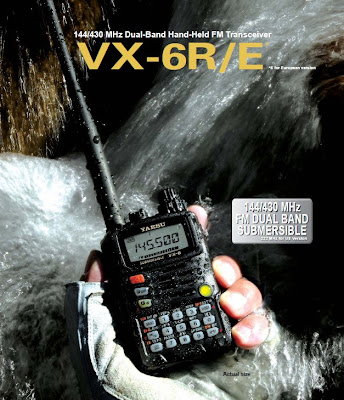 The price for this flexibility in so small a package is a complicated user interface with multiple keystrokes to get to some functions. You will need to spend some time with it to learn how to use it proficiently in a crisis.
While radio propagation is a fascinating field and subject to all sorts of variations, VHF/UHF radios are considered “line of sight” and have limited range, typically a mile or two on level ground without obstructions. These radios are usually less than 5 watts output, a concession to running on a small internal battery, and power brings range. In general, to double the range, you need four times the power (an inverse square decrease). That means if I can communicate two miles between 5W HTs, to communicate four miles, I need 20W. If you have a better power source, like a car, or to use at home, don't restrict yourself to an HT. Instead, there are mobile and base station radios that include the features of these HTs and allow higher powers, often 40 or 50W, sometimes more. (For comparison, aircraft comm radios, which are AM mode just below the 2 meter band, typically have an output power of 20 W and are considered to have a range of 100 miles – but there are no obstacles to the signal). A comparable selection chart to the previous is here.
Finally, there are radios that cover HF, VHF and UHF, all bands, all modes. These tend to be the most expensive, and draw the most power, but can be the centerpiece of a communications center. They are on that chart, too. You might come across a used radio called an IC-706MKIIG, now discontinued, as an example of this sort of radio. This has been said to be the most popular ham radio ever produced, with sales in the tens of thousands. I have used friends' radios and they are excellent value. Today's versions might include the IC-7000, FT-897, and FT-857.
Antennas.
While any old piece of wire tends to work for receivers, transmitters face harder requirements that tend to make antennas a more complex subject. To be effective, transmit antennas need to be greater than 1/8 wave long, and a wavelength varies from quite long at the low end of the HF spectrum (1.80 MHz, 160 meters: over 480 feet) getting shorter as the frequency goes up. This is one reason why hams tend to refer to frequency band by wavelength, like saying “2 meter HT” rather than “146 MHz HT”; it gives a clue to antenna size. The antennas that come on HTs tend to be multi-band compromise antennas because the radios are designed for convenience, not the ultimate performance. The standard antenna used in many industries is the 1/4 wavelength monopole. If you wanted to make one, you'd cut a wire to 234/f feet long (f is frequency in MHz), or 19.2” long for 146 MHz. You can see that running around town with a foot and half antenna on your hip could cause some problems and that's why the HT antennas tend to be shorter, less effective antennas. This affects how well you can communicate; your range.
If you thought gravity was a tough taskmaster, electromagnetics doesn't give up a thing. Maxwell is just as unforgiving as Newton.
What this means is that you'll have to accept poorer performance from the HT than is theoretically possible, but you might be able to make that up if you're communicating with a Comm Center that can put up bigger, better antennas. This is why amateurs have spent millions of man hours and millions of dollars out of their own pockets to put up an infrastructure of repeaters that (as the name suggests) receive your HT on one frequency and re-transmit it on another. Having a repeater can make your HT go from having a couple of miles of range to having perhaps a 20 or 30 mile radius. On the other hand, repeaters, like any centralized infrastructure, can be taken down by an aggressive government, or enemy force.

It also means that if you're trying to be sure you can communicate with your spouse across town, you should try to put up an outside antenna, as high as you can, and test it out before the SHTF.
Training scenarios:
Alright, let's start putting some ideas together. Say you're in a Cairo situation, and there is rioting going on. The streets are blocked. You want to contact your friends to either join in or get out of town. The first step is you must be tuned to the same frequency. That means you have agreed meeting frequencies. If the frequency is in use, you must have agreed plans. Something like, “if TSHTF, and the repeater is down, I will meet you at the 5 minute marks on 146.540MHz. If it's in use, I'll switch to 446.540 MHz. If that fails, I'll try again on the 7 minute mark.  I will call you first.”. Keep your transmissions short. If you are simply meeting your spouse or friends to exchange plans, “I'll meet you at the kids' school”, or “I'll meet you at liberty square”. Once you've made initial contact, you can go to other frequencies, programmed in advance in your radios. Keeping your transmissions short reduces the ability to get a DF fix on you. Keeping your transmissions too short might not be good either. Something like, “initiate plan A” doesn't sound very good to monitors. You have to remember in a Without Rule of Law situation, soldiers listening in might think, “Initiate plan A” means, “Get the bombs” and not “Go pick up the kids, let the dog out, and meet me at Mom's”, so be careful about being on the air.
Other situations
Let's assume it's not rioting, there's no clear SHTF, but the situation from last night's post has happened. The Internet is down to prevent “vitriolic rhetoric” or “hate speech”. We need a way to communicate.
Of course, amateurs sitting around in on-air round table discussions are as old as radio itself, but if there is concern about monitored, an alternative might be better. Before the days of the Internet being everywhere, hams put up packet radio BBSes, a radio version of the computer bulletin boards that were popular. The most common place to find packet stations was 145.100 MHz, using low speed (1200/2400 bit per second!) Terminal Node Controllers.  A good introduction to packet radio systems is this summary from one of the groups that started it.  This network is still in place. Hams also built a transcontinental, HF packet system, this time at the lowly 300 bps, but being an autonomous store and forward system, messages could be gotten around the country in a straightforward way. You simply sent the message to your local packet station and it was handled autonomously by the packet system. 1200 BPS is not going to get you a web page like this, with high resolution graphics built in, but it can get you mailing lists, and any sort of text communications you'd like.
Today, hams have increased the packet speed to 9600 bps, but this requires a radio designed to be compatible with the higher audio bandwidth 9600 uses. There has also been some experimentation with higher speeds (56k), but that requires dedicated UHF radios. The most popular modes remain those that can be added to a radio that the ham already owns, usually by plugging into the headset and microphone jacks of that radio.
Now we run back into the security issue. With a voice radio, once you're done saying what you're saying, it's gone. It's possible the monitors never heard you at all.  With a packet system, it's in a computer somewhere, which means it can be read by someone else some other time. Here we need to crack the problem of protecting privacy.
And that, as they say, is the topic for tomorrow.
Posted by SiGraybeard at 4:03 PM