The Conflict of Visions Extends To Your Wallet

I hammer on Ben Bernanke and the Fed as much as anyone, I think. Well, maybe not as much as JDA ((if the new career doesn't work out) “I'll be foaming your latte by day and still up Bernanke's ass by night.”). In my view, the Fed is running the country's economy into the ground, and the fact that they are doing it deliberately gives me a lot of problems. There are really two alternatives. They honestly believe that the things they are doing are right, and they will fix things. Or they are deliberately lying, trying to rape the economy, screw the people, steal the money, and don't care how much destruction they wreak. And it gets worse. It's not just Zimbabwe Ben and the Fed; the central bankers in every country around the world are doing the same basic things.


My inner voices don't like this. I can envision a few really evil people (because only truly evil people do things they know are wrong for long periods of time) in the central banks, but imagining that every banker in the world is evil is a stretch for me. That implies that the central bankers are well-meaning idiots. To put it more kindly, they are following a flawed theory that is leading them to flawed conclusions. Also, never forget that they can be both insane and stupid, like a Bill Ayres.
Call me Pollyanna.
Professor Thomas Sowell, a man who truly needs no introduction, wrote a masterpiece called “A Conflict of Visions”  and which Kevin at the The Smallest Minority had an excellent uberpost on, "What We Got Here is Failure to Communicate”. The thesis is that statists (“progressives”) and individual liberty advocates (“libertarians”) have completely different visions of the world. In the context of government, progressives believe that mankind is inherently perfectible, and with the right smart guy to run any system, no matter how complex it might be, things will be fine. The government can be infinite in size because these wise bureaucrats will administer your lives better than you can. In contrast libertarians believe that man will always be flawed and corruptible; therefore, government needs to have as little power as possible, so that power can't be used against people. Dr. Sowell uses the term unconstrained and constrained visions, respectively.
It seems that the same sort of conflict of visions has extended to economics, where most schools seem to teach Keynesian economics, or something based on it (do I need to point out colleges have been essentially taken over by progressives for a century?). In contrast, Austrian economics is not studied nearly as much. Central bankers all over the world are following Keynesian theory. Not having a fixed monetary standard is ideal for governments: they have always wanted to spread more money around than they really have, be it domestic political favors or foreign adventures. Having this progressive system where a dollar is worth whatever you think it's worth is like opium to government spenders. Are there any countries in the world still on a gold standard? None that I know of.

A little musical interlude might help.
A perfect example of the difference in philosophy is going on right now – QE2, the second round of quantitative easing by the Fed. Followers of one system believe that buying our own debt with money we digitize out of nothing is inherently inflationary. Followers of the other say it isn't. After that 60 Minutes interview, it bothered me that Bernanke could sit there and say those things, and I needed to try to understand why he thinks as he does. I think I've found the answer. He believes that because of the theory of velocity of money.  This is "hold your hand over your hearts" stuff in economics classes - considered fundamental to their subject.
The velocity of money - http://en.wikipedia.org/wiki/Velocity_of_money reduces to a simple algebraic equation. If you've taken Chemistry, you might note the extreme similarity to the ideal gas law, which makes sense in a way.
Vt*M=nT
where
Vt   is the velocity of money for all transactions.
nT  is the nominal value of aggregate transactions.
M   is the total amount of money in circulation on average in the economy (see “Money supply” for details).
The idea here is that if you printed a quadrillion dollars, but then put them in a safe, they would not be inflationary because their velocity is zero. The problem is that this theoretical boundary case tells us nothing.  The assumption is impossible and is just the sort of academic simplification that causes trouble. It's fine if the Fed issues these made up dollars to someone who puts them in a safe; the question is, “what happens when they really, really need those dollars?” I say they spend them.  When V>0, printing that quadrillion dollars is inflationary.
What Bernanke was saying in that 60 Minutes interview is that they have such tight control over the velocity of money that monetizing our debt can't cause inflation. Try as I might, I can't believe that. The amount of information they have is never going to be adequate to control as well as the automatic feedback systems of the open market. Bernanke is claiming the most complete command system there could possibly be (i.e., totalitarian central government control). We are not completely fascist.  Yet.
If they had perfect control, why would the buying power of a dollar today be only a few percent of its value in 1913 when the Fed was given control of our economy? We remained on a gold standard until 1934. Gold was re-valued then and we spent almost the next 60 years loosely tied to it, until the Nixon administration unilaterally de-coupled the dollar from gold at the Bretton Woods II conference in 1971, where the dollar became the reserve currency of the world. This chart shows the value of the dollar measured against the standard of the 1913 dollar. If you want to consider the ratio in gold, remember the dollar was pegged to gold at $35/oz in 1934. Today's price is around $1400. The dollar is 2.5% of it's 1934 value in terms of gold.

This sort of devaluation of the dollar, inflation, is deliberate. When the government sells bonds to cover deficit spending, they promise to pay back a certain number of dollars. By inflating the currency, they can pay back the debt with dollars that are worth less than when they were loaned. It is nothing less than the deliberate screwing of the bond holders. Inflation is taxation on the productive people, and especially hard on the savers. 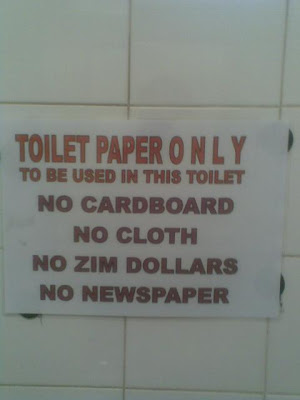 (warning sign from Zimbabwe, asking you not to use Zim dollars in place of toilet paper - from The Economist)

The central issue (to me) in these systems is “what's a dollar worth?”. In a Keynesian system, dollars float with respect to all the currencies in the world. In an Austrian system, there is some sort of commodity based standard: as I've said before, it doesn't have to be gold or silver, but can't be paper money which can be printed in essentially unlimited amounts. Over two centuries ago, Voltaire noted that, "Paper money eventually returns to its intrinsic value -- zero." Do we need to be on a gold standard? You may be surprised to see I say “no”. Not having a standard doesn't require you to be an undisciplined idiot with money.  It really could work in theory - if people were perfect.  Practically, though, we really should be on a gold standard because a limited commodity enforces discipline onto politicians, who otherwise show worse discipline than drunken sailors (who, after all, stop spending when they're out of money). That's a statement of the constrained vision. There's no reason for the debt we run up other than to give money as favors to buy votes.
Austrian economics requires one to be “grown up” and live within your means. It enforces fiscal discipline, so you can see why politicians would hate it. They can't print money out of thin air. They can borrow money, if they can find someone to buy the bonds, but they're obligated to pay bonds back with money that's worth what it was when it was borrowed. The only way to expand the monetary supply is to get more of the commodity the system is based on, be it gold, silver or the large stone rings used on Yap.
I believe it is no small coincidence that the main advocates of the Austrian economics are libertarians, while the main advocates of Keynesian economics are progressives. We have no less a conflict of visions in our economics than in everything else. The essence of the progressive view appears to be that there are no rules and no limits, and we can make a perfect world system for our perfect new men. The contrasting view is that there is a real world out there, and it imposes real restrictions on us. Contrary to the car commercials, you can't break the laws of physics – or they wouldn't be laws. One of those restrictions the world imposes is that if something is to be valued, that is, something others want to accept in trade, the quantity of it has to be limited. It's why a synthetic ruby, say, chemically identical to the natural item, but producible in any quantity, is valued less than the real item.