The Dawn of the Chinese Century

Without doubt, the 20th century was the US' century.  The century began with the US as a burgeoning economy and it was a century of remarkable growth; a century of exceptional achievement. The century began with the first powered flight at Kitty Hawk, North Carolina, and ended with Voyagers 1 and 2 leaving the solar system. The telephone went from an expensive curiosity to omnipresent. 100 years ago, “calculator” was a job description. More people were lifted out of poverty, and more people were liberated from tyranny than had ever lived on the planet before the 19th century, all as result of American leadership.

The parallel course in the US - the century of forces inside the country doing their best to destroy us eventually completing their "long march through the institutions" - succeeded in their "death by a thousand paper cuts" strategy and the US limped into the 21st century a weak pauper.

100 years ago, there was no Federal Reserve system, no IRS and no income tax.  100 years ago, the US was a creditor nation, busily developing its natural resources; learning to manufacture on a vast scale, developing a global presence.  As the US grew, Europe essentially hung itself with two massively destructive wars; and, of course, the inter-war period was a hotbed of socialist revolutions that re-shaped the social landscape.

At the end of WWII, the manufacturing infrastructures in Europe and Japan were in ruins.  The unique situation of a growing manufacturing base with little competition caused a generation of American managers to live as though there was no such thing as global competition and product prices were almost meaningless. Yes, GM had competition from Ford, but they had similar cost structures so they couldn't drastically undercut each other's prices. This situation allowed US companies to cede major concessions to the unions, and when lower cost competitors started to arrive on our shores, their shoddy quality kept American goods in the premium category; they may have cost more, but they were generally recognized as better. I remember vividly comedian Red Skelton quipping, "Marriage is made in heaven; everything else that doesn't last is made in Japan". That was around the time the Japanese were learning quality control from W. Edwards Deming, the Iowa-born statistician, whose statistical approach to quality control made Japanese products the new standards of quality. When Japanese auto companies radically out-competed American companies, by producing better cars and lower price points, the Americans went to congress to get trade protection.

Today, China is somewhere analogous to the US in the early 1900s and Japan in the 1950s. They are rapidly developing their natural resources and manufacturing capability. They are expanding militarily and exerting more influence both regionally and globally. In the industrial base, they manufacture everything, and are learning to produce consistent quality. Companies from around the world are establishing branches there to produce products at lower cost. China, though, does not respect intellectual property rights (it's not a concept they share), so these workers and managers take what they learn from the foreign companies to establish their own production. Considering their population is around four times the size of ours, I have always thought that China's industries were learning to manufacture for their growing home market, and selling us the test pieces rather than dumping them in the Pacific or recycling them. Once their consumption of their own manufactured goods becomes enough to keep their people employed, they'll have little use for us. 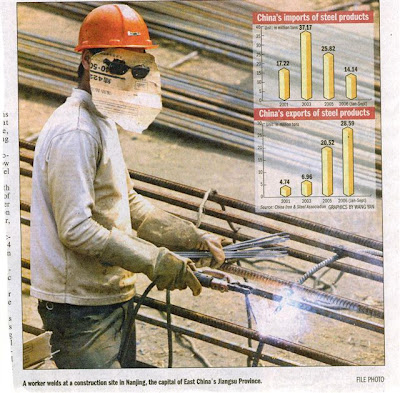 (Chinese welding masks are a bit less protective than ours)
In the financial world they are becoming the dominant power. While the US is a debtor nation, China is a creditor nation. While Americans tend to buy whatever they want and pay on credit, Chinese tend to save. We run continuous trade deficits with China that provide an enormous flow of dollars into their coffers. They buy our bonds, allowing us to fund our economy on consumer purchases that eventually ends up helping them.

Is it any wonder we don't see eye to eye on much of anything?

In 2003, when I first got going in the home machine shop hobby, there were stories of Chinese agents walking into scrap metal yards (the usual resource for people buying small quantities) and offering a fat payment for the entire scrap yard.  Since then, China has been taking the money from the trade surplus with us, and realizing that the dollar is screwed, they've gone on an epic buying spree. They're not buying gold: they're buying gold mines. Likewise copper, aluminum, iron, oil, everything they need. They are in African countries buying mines, developing land, building roads from the mines to the shipping ports.  This helps the country they buy from and helps the workers they provide.  They're spending their surpluses wisely. Why hold on to dollars when everyone with any sense knows that as long as Zimabwe Ben is in charge, the dollar is heading toward the value of the paper it's printed on?

Where I stop short is the widely quoted idea that China has a perfect government. China's government still tortures and kills dissidents, and exerts dictatorial powers that our Fed.gov only dreams of. State directed markets are an oxymoron. What they have is more like Mussolini's fascistic Italy, or the National Socialists in Germany.

For now, the US economy is larger than China's. For the rest of this decade, the US economy will be losing ground. Soon, we will be overshadowed (sooner, still, if the US collapses in the next year or two).  As it is, they are economically growing, and so is most of the non-Western world if you exclude Japan. If you're in my business, it's a good idea to try to learn some Mandarin.

To me, it looks like the dawn of the Chinese Century. It looks like the sunset of those quaint, Western (really, Judeo-Christian) views on human rights, racial equality and due process. China is a very race conscious culture and any country that harvests organs from prisoners is hardly a haven for due process of law.

One thing you can depend on is that history rarely unfolds in a linear and completely predictable fashion. One large source of hope for these concepts is that there are now more Christians in China than Communist Party members. China's famous one-child policy could be good and it could be bad. A nation of only-children could well become a nation of spoiled brats, used to getting whatever they want. A nation of young men who have no prospect of getting married could be militarily aggressive (Chinese girls tend to be either aborted, killed as children, or adopted out). Or a nation of mostly male only-children may have little interest in keeping the government that put them into that position, and overthrow their leaders.

There's a saying that's often said to be a Chinese curse, “may you live in interesting times”. We certainly do.
Posted by SiGraybeard at 6:27 PM