How Do You Know What You Think You Know?

People operate in life from things that they believe are true.  But how do you know what's true?  Can you demonstrate it?  Prove it?  Believe it?  Personally, I have a hierarchy of certainty.  At the top would be mathematics and mathematical physics, which are the epitome of hard science.  I can prove a theorem (or understand someone else's proof) and know for sure if it's right.  Every child should know how to check subtraction by adding and vice versa, for example.

Below that are things that I can demonstrate but that aren't physical law.  For example, I can demonstrate some engineering principles that are derived from physics, but themselves don't rise to the level of law.  How about medical questions, like whether dietary salt is related to blood pressure, or dietary fat is related to heart disease?  Questions like these are typically answered by statistical studies of various types, using the crudely-stated criterion ("assumption") that if the effect correlates 95% of the time, it's close enough to use.  Moving down the list, eventually one has to confront things that they believe to be true, but can't prove in any rigorous sense.

Where I'm going with this is Kondratiev cycle theory and theories like Howe and Strauss' generational theories that I spoke about here.  Of course, there are other cycles, like Elliott Waves, that analysts talk about.  There are many people who call these crackpot junk theories, like Murray Rothbard at Lew Rockwell.  On the other hand, Ian Gordon in that first link has had spectacular investment returns - 70% per year - by following Kondratiev principles in the last decade.  Dude, if I had 70% per year since Y2K, I'd be retired and playing a whole lot more.

Here's my point: what if these observations correlate with reality not at the certainty of mathematical proof or even at the 95% correlation rate, but correlate at 60 or 70%?  By analogy, if you had a coin that gave you heads 60 or 70% of the time vs. statistical 50%, it's a safe bet.  If you get someone to bet against you often enough, you'll make money.  There's a famous old engineer joke about the engineering geek guy and the hot actress of the day, that ends with him saying, "I'll get close enough".  What if these wave theories aren't really provable and aren't really "science", but get you "close enough"? 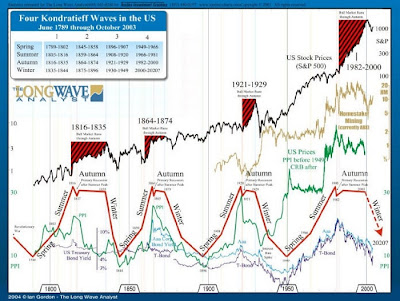