The Corruption is Stunning - Part II

This time, add in-your-face arrogance.  The BATF, embroiled in the Gunwalker (aka Fast and Furious) scandal, is trying to push through silly restrictions on the purchase of long guns.


Under the proposed rule, gun dealers would have to report sales of two or more rifles to an individual at one time or during a period of five business days if the rifles are semi-automatic, with a caliber greater than .22 and detachable magazines...  (emphasis added - GB)

This idea that Mexican drug gangs come into the US, spend hundreds of dollars for a semi-automatic AK-47 in American gun stores, when they can get fully automatic versions in Guatemala for $25, is insane.  Cables released by Wikileaks verify that the majority of the arms the cartels use come from Central America, not the US.


Yet one of the cables maintains that 90 percent of the heavy armament Mexican security forces seize from cartel gunmen comes from Central America.

Heck they probably get guns given to them by corrupt Mexican Army members, or steal the AKs from the Guatemalans.  Which makes more sense?  Come across the border into the US, and bring back a few expensive semi-automatics, or buy a cargo container and pick it up at the port?  I know that rifles do go across the border from the US - they're all being shipped by the BATF!  Whistleblowers say thousands of guns were involved in Gunwalker, making the US Government the largest known runner of guns into Mexico.

According to Mike at Sipsey Street:


It was first published in December and had a 60-day comment period that garnered almost 13,000 responses. About 30 percent opposed the reporting requirement and 70 percent favored it, ATF said.

Looks like a concerted effort by the antis - Codrea says it was Mayor Bloomberg; also looks it's time to comment to BATFE again.  Care to join me? 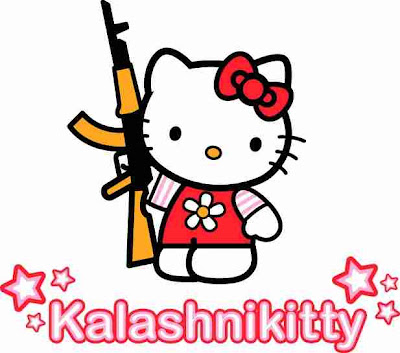 Excuse me, ma'am, but where did you get that AK?

Hmm.  Maybe I should try to lobby them for my version of common sense gun laws.
Posted by SiGraybeard at 9:36 PM