We Are Well and Truly Screwed

After I stopped listening to the news out of the corner of my ear the stupid party agreed to do nothing and agree with the evil party, and government shutdown was averted.  Extra style points for saving the government from shutdown on a weekend when 99% of the bureaucrats don't even work.  Wow.  What a bunch of guys!  This morning, many of the news sources were calling this a stupid party win.  The only explanation I can come up with is that the terms of the agreement must have been "you'll tell everyone we won, and we'll be your peg boys". 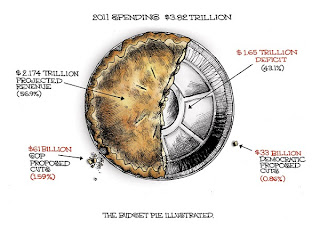 In this illustration, posted last night, the final agreement was to cut $40 billion.  That's not even meeting the Democrats 1/2 way.

I caught a few seconds of Governor Huckleberry Hound as I was coming in from church at 8, and he was explaining that the evil party controls 2/3 of the government so it really doesn't matter what the "people's house" does.

Let's grab a few headlines, shall we?  All these from Drudge Report at 2130 EDT.
Let's see - no vote to keep the EPA from regulating CO2, no vote to de-fund Obamacare, and even though they voted to tell the FCC to drop the net neutrality laws, Comrade Peloski said, "Screw you, we're doing it anyway".  Does this sound  like a win?  Ooooh - they're going to force the senate to vote to approve funding for planned parenthood.  That'll show 'em.  Don't they vote to approve funding for everything, all the time?

I gotta tell you, while I continue to be bullish on commodities in the long term, I have no idea how the market is going to react Monday.  Are they going to run the dollar down?  Will $1475 gold and $41 silver look cheap by Friday?  Isn't that like sitting on the Titanic and marveling that the sea looks awfully high tonight?  Or are the central bankers going to say, "OK, problem's over, back to business as usual" and the dollar goes up?

In the meantime, as they say around here when hurricane warnings go up, "Preparations should be rushed to completion".