(Kitco News) - Comex gold and silver futures prices rallied sharply and moved to daily highs in afternoon trading, in the wake of a bullishly construed statement from the Federal Reserve. June gold hit a new all-time record high of $1,524.20 an ounce. The U.S. dollar index weakened and fell to its daily low, hitting a fresh 2.5-year low, in the wake of the FOMC meeting statement, which contained no major surprises but did hint that U.S. interest rates would remain low for some time to come. That was bullish for metals due to the inflationary implications and because it was also bearish for the U.S. dollar. 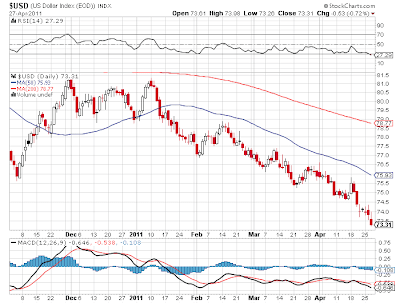 I find this particularly funny because I saw Elfin Timmy Geithner on TV first thing this morning, saying the US is firmly committed to a strong dollar.  I almost dropped my breakfast:


“Our policy has been and will always be, as long as at least I’m in this job, that a strong dollar is in our interest as a country,’’ Geithner said in remarks at the Council on Foreign Relations in New York. “We will never embrace a strategy of trying to weaken our currency to try to gain economic advantage.’’

Seems the investors of the world don't believe him.  You can see why Pimco is shorting US bonds and China has been dumping US dollars since at least last October, when they became net sellers of US debt.

As Karl Denninger says, “The market is bigger than any one man or any one nation and it does not suffer arrogance lightly. Virtually everyone who has tried to tangle with it has wound up with their head between their legs after not only their head was chopped off but both arms as well.” In this case, the market has concluded that the Fed is going to keep deflating the dollar, keep monetizing our own debt, and the US will keep declining until the collapse.