Fun Rumor Out of the LHC

Turning our backs on the economic collapse, I note some interesting rumors flying around the Large Hadron Collider over at CERN.  There's some evidence that they have indeed spotted the Higgs Boson, one of the reasons for constructing the LHC. 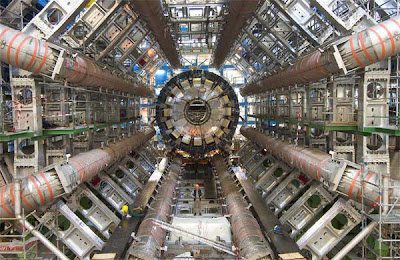 A look down the axis of the Atlas detector in the Large Hadron Collider.  Note the people: one standing facing camera on the large white block in the middle, and another working on the left (the yellow safety helmet stands out).

In English?  Over in Switzerland, near Geneva, the CERN (European Organization for Nuclear Research) has constructed the largest scientific instrument ever made, the Large Hadron Collider.  It is a particle accelerator and colliderl that is, it's a large machine for colliding hadrons, not a machine for colliding large hadrons.  The claim to fame of this instrument is that it is designed to generate higher collision energies than have ever been observed.  It does this by generating particles and anti-particles, accelerating them around an enormous (17 mile circumference) loop until they accelerate to nearly light speed, and then smacks them into each other in that detector (or another one like it).

The purpose of this is to understand what matter is made of, and test theories in physics.  Also, another purpose is  to look at the machine, it's parts, and the printouts of results and say, "cool...".  The idea is that when you smash the particles into each other, they break apart into the things they're made out of, much like if you smashed two watches into each other at nearly the speed of light, you'd get a shower of gears, springs and dust.  The size and energy levels in the LHC led to a lot of pre-construction speculation that it was going to somehow destroy the earth, perhaps by forming a black hole or strangelet or by bringing beings from another dimension, or something like that.  Since we haven't seen Elvis, and the planet hasn't been sucked into a black hole (unless I slept through that) I assume those were just crackpot ideas.

The Higgs Boson features in almost every major theory of physics, but has never been observed.  The particle is named for Peter Higgs, the theoretician who figured out it must exist.  A famous physicist, Sheldon Glashow, I think, said something to the effect of "A Higgs boson is like a toilet; every house has one, but they're not objects of great beauty, and the owners don't talk about them much".  Which leads to here.

And I think an excursion that leads from the most avant garde physics of our time, to the largest particle accelerator ever built, to the Higgs Boson and finally to an over-priced toilet is probably enough for one night.