Why The Fed Must Implement QE3

I don't mean that I want them to; I mean that we're coming to the end of the road, and there are no good solutions.  It's the "least awful" thing they can do.

It won't work.  It can't work.  But they'll think it's the right thing to do.

Look, the world really changed the day of the Japanese quake/tsunami; if you'll pardon the analogy, the economic tectonic plates shifted as much as the real tectonic plates.  Japan used to be our number two buyer of debt; they're out of the market.  China ran a trade deficit and is raising interest rates to head off the inflation they're importing from us.  The only other market in the world large enough to buy a large amount of our bonds, the European Union, has seen its European Central Bank start to raise interest rates.  How long do you think we can sell a $45 billion in bonds per day (the projected deficit for 2011 divided by 365 days)?  The Federal Reserve is the biggest buyer of our bonds right now.  Alright, they technically don't buy them; they give the money to another bank who buys them and then the Fed buys them from that other bank.  Pimco and other institutional buyers of US bonds have either publicly stated they're getting out of our bonds or are short selling them.

That's at least five pressing reasons why our interest rates must go up.  But that would kill the last little false glimmer that the Fed believes is saying the US economy is in recovery.

By the way - have you noticed that most stores selling Mountain House freeze dried foods and other "survivalist" supplies are backordered for months?  No number 10 cans available at all from Mountain House themselves?  And no, it's not FEMA, according to Mountain House.  That was a request for prices on a bid that never got placed.

So the Fed is in a can't win situation.  If they raise interest rates to where they should be - if inflation is currently running close to 10% the rates paid on the bonds should be there - that will cause more economic havoc and make them look bad.  If they don't raise rates, no one will buy our debt and they'll need to create more money to buy more bonds - QE3 - which will lead to worse inflation and make them look bad.  While episodes of true hyperinflation are historically rare, there's a real chance they could create that, too.  Then they'd likely look really, really bad.  This could conceivably bring down the Fed.

The famous deal the two parties made last Friday?  Meaningless.  It amounts to cutting spending less that 1% - which means the budget for 2011 is still bigger than 2010.  Obama's listless, inaccurate "eat the rich" speech?  Equally meaningless (this graph from Heritage is only through the rest of this year) 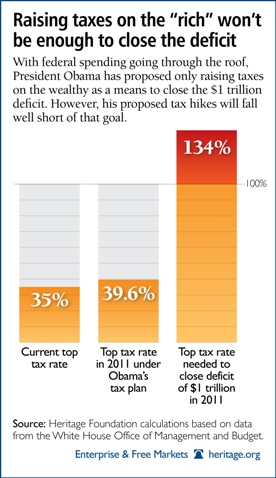 I believe that since they are consistently, almost institutionally incapable of seeing the inflation they create, the Fed will see more quantitative easing as unavoidable and will buy more bonds.  They will believe that inflation is the better option.  The Fed bought 80% of the bonds in 2009, so really, what's another 20% between friends?
Posted by SiGraybeard at 9:34 PM