Of Course, You Know This Is Theater, Right?

This "government shutdown" nonsense is just there to entertain us, right? There's no such thing as an actual shutdown of the Fed.gov leviathan.


As Rep. Michele Bachmann, R-Minn., noted this week, "three-fourths of the federal workforce would stay in place" during a shutdown — making it not a shutdown but a slowdown. In addition to Social Security, "the military would continue to be paid, and all essential services" would go on, Bachmann told reporters.

The stupid party is proposing about $60 Billion in cuts.  That's good in principle, but it's only a few days spending.  The evil party is counter proposing a day or so in spending cuts.  The whole thing is hung up over the stupid party refusing to fund Planned Parenthood (slogan "aborting black babies since before it was even legal!" tm)  The evil party doesn't have any religion, except environmentalism and abortion.  Since abortion is their "most holy sacrament" they will shut down the government so that they can keep doing abortions.  Don't believe that crap about no breast cancer screening: planned parenthood doesn't do that.  You go, evil party.  Your mama would be so proud. 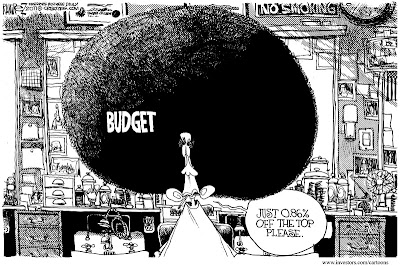 A good cartoon (I love the way he draws our anointed leader) but this pie chart (also his) will stay in your memory. 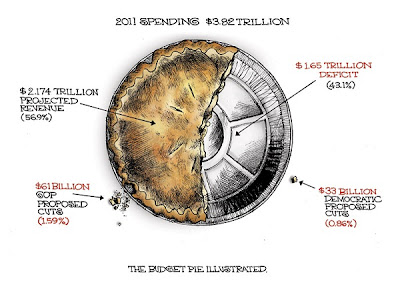 In my mind, the risk of collapse doesn't get significantly smaller until that pie looks more like it came out of the oven and less like it survived a horde of kids (or just survived me).  The problem is that world isn't necessarily going to wait for us to do that.

Our deficit this year is going to be $1.65 trillion (last time I heard). The problem is that's more than the entire GDP of all but about 8 countries in the world. Who can loan us that much at any interest rate? It comes down to only three places: the EU, who has their own problems (I'm betting they collapse within a year or so); Japan, who isn't going to be lending much to anyone for a couple of years while they clean up from an incredible run of disasters, and China, who has their own problems - there are writers expecting them to go down soon.

I can't see how this ends well, but it will end sooner than later. Things that can't go on won't go on. We've generated more debt than the proverbial "all the money in the world".
Posted by SiGraybeard at 9:49 PM