It Took a While to Get Here, But I Made It

"When we last left our story..." my RCBS hand primer was giving me all sorts of troubles.  I returned it to RCBS at their request, and it was replaced with a new one that came Thursday.  Friday night, I sat down to try it out and had much more success.  I still buggered up a few primers, but definitely got better results than the first time.  I'm willing to consider that not all of the brass fits the CCI primers well, and if it gives me a hard time pushing the primer in place, I'll just pull the cartridge out of the tool and start over with a fresh one.

Yesterday was devoted to making our powder dispenser work, weighing charges, changing settings and repeating, until I could get it work repeatably.  I set up three different combinations of loads for the bullets I had bought, Hornady 68grain BTHP "match" bullets with Hodgdon Varget powder (the ones pictured here have a cannelure, which the actual bullets don't have; stock picture I assume).  The 68 grain BTHP bullet must be new, as there isn't a recipe for it in any source I have, but some generous folks had posted some loads online somewhere; it's in the new Hornady book. 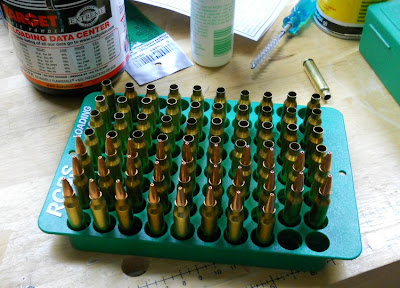 I ran into some issues, but never anything serious, so by about 11:30 this morning I had this tray.  There were supposed to be 10 rounds of each mix, but with the little problems I was going through, I managed to drop some powder out of two of the low end load, and just poured the rest of the powder out and put those cases in the back.

One of the things I like about this combination is that it isn't possible to double-charge a shell; the brass is almost full with a single charge.  A few of the online comments were that when you do a redline load of Varget with this bullet, you can hear some powder crunch when you seat the bullet.  A good thing.

I decided to shoot the "Willie Nelson" load (the one in the middle) first, and put all 10 bullets reasonably close (by my definition of reasonable).  Then I went to the high velocity load followed by the low velocity.  All of them seemed fine to me.  Naturally, I was concerned about a slam-fire, where the bolt closing sets off the round and was happy that didn't happen.  While a bit scary to start off, the day was quite uneventful.  Everything went where I put it.  In reality, the combination of match grade bullets and precisely measured Varget powder is better than I am - for now - so I'll just choose one powder load and go with it. 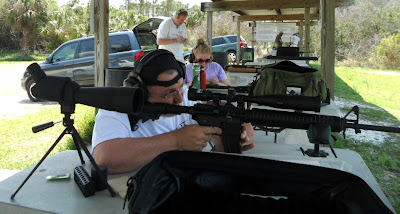 Of course, I shot everything with my home-made AR, which is essentially a DPMS made on a Colfax 80% lower. 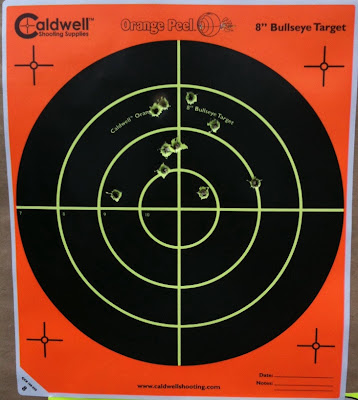 All told, it took longer to produce some hand loaded ammo to try than I had expected, but I learned a lot along the way, of course.  Doing one round at a time batched through the single-stage press is surely not a fast way to generate lots of ammo for your AR.  That sounds like a job for a progressive press.  This method is probably better for small amounts of ammo for bench rest shooting a bolt action something or other...
Posted by SiGraybeard at 8:18 PM