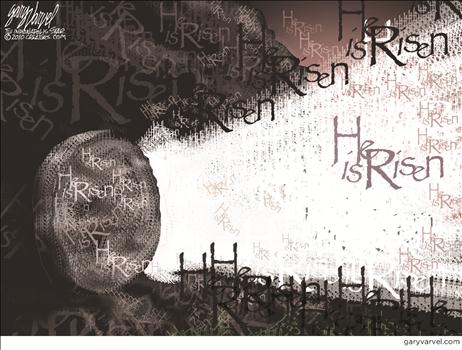 (Source here)
Last Saturday, author Lee Strobel wrote a piece for the Wall Street Journal called "How Easter Killed My Faith in Atheism".  It's short, only about "a page", so it's worth your while to RTWT - if you're the kind of person with any questions about faith, or can't understand "how can an intelligent person believe in God?", a common idea.  Ever noticed how when the average comedian does a parody of a dumb person, it's always someone with a southern accent?  If they're going to make fun of Christians, it's always a dumb southerner who pronounces "Jesus" with three or more syllables?  I'll leave the topic of perceived intelligence of southerners vs. northerners for another day (well... except for this).

My wife didn't show any of those "positive changes in her character and values" - she really didn't need any - (no disrespect to Mrs. Strobel intended).  And although I didn't have "journalism and legal training", I had studied biochemistry and microbiology in college through my third year before eventually getting my degree and starting to ply my trade as an engineer.  Strobel's own book, "The Case for Christ"* played a role in filling in the gaps in my historical knowledge.

The other religions of the world are about ritual and ultimately about self, about proving yourself worthy; Christianity is about grace.  You're not good enough on your best day; you are saved by Grace.  No other religion teaches Grace.  Islam teaches that Allah is unknowable.  Christianity teaches that not only is God knowable, he wants us to know him.  Islam doesn't teach salvation, it teaches servitude to a fickle, arbitrary, distant Allah.  Christianity teaches forgiveness by Grace; that you're given a gift by a God who wants a close personal relationship with us.  I like the way the Message translation does this verse (Ephesians 2: 8)

Evolution vs. creation? I believe people pay way too much attention to this.  There's no mention of evolution in the bible, but there's no mention of the laws of thermodynamics, Avogadro's number, or relativity.  The bible isn't a science book.  Look at it this way: the creation story, how we got here, takes up a page.  The next thousand pages (or more, depending on font size, paper size, and so on) are concerned with how we treat each other while we're here.  Creation is clearly not the emphasis of the book, it just starts out that way.  And saying nothingness or a fluctuation in the quantum vacuum exploded into light ("Let there be light") sounds like as good a picture of the standard model of cosmology for non-physicists as I can think of.

Enjoy your day.  Enjoy your families.  I have a pork shoulder and three-quarters of a chicken in the smoker as I type.  Enjoy things while we can.

* - it's probably time for my frequent disclaimer that links to books on Amazon are so you can see the book I'm talking about; I don't make any money off anything you see on this web page.  It's entirely self-funded; as long as lots of folks keep flying commercial air travel, I'll have a job as long as I want.
Posted by SiGraybeard at 2:26 PM

Labels: Me, the big picture