Odds and Ends Round Up

Calculated Risk blog updated one of the graphs I look at regularly.  I haven't posted it here in a while, so check this out: 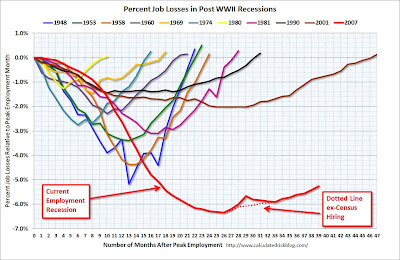 This is certainly the record breaker, isn't it?

Is there really a recovery in progress?  There are signs in some areas, but few and far between.  Plus, you never really know if something like the DJIA going up is due to recovery or Quantitative Easing.  "Dr. Copper" is signaling to be cautious.

The resistance up at about $4.55/lb has held and prices haven't really been testing that.  The pattern looks like it might be lower highs and lower lows.  Perhaps the bull is running out of breath?  The WSJ reports that


Chinese buyers are now facing the double whammy of higher copper prices and the government's aggressive moves to tighten credit. Moreover, evidence has recently surfaced of previously unreported copper stockpiles, a sign that much of the purchased copper hasn't been put to use.

Copper has been called "Dr. Copper" before because it has had a tendency to help predict future growth.  It's such a heavily-needed industrial metal that it's a good leading indicator of expectations.  Is copper warning of a global slowdown in the coming months?

You may have heard that our glorious overlords at the Federal Reserve (in the person of apprentice Lord of the Sith, Janet Yellin) have said inflation is not a problem  and they have no intentions of shutting off the free money pipeline for their cronies.  No need to raise interest rates.

Does anybody in the US take it seriously when Evil party representatives come out and make the statements they make?  When a budget cut is about 1% of total spending and they scream like someone ran their hand over power tools?  Like when Harry Reid whines about the budget impacting the cowboy poetry festival or the cherry blossom festival?  Does anyone not shake their head at this guy?

Lastly, have you noticed the new talking point, "we're not broke" or "we're not out of money"?  A plea to tax the rich more.  (Rich is defined as anyone who makes more than the person making the statement - other than Michael Moore).  Oh, no, we're not broke.  We're way past broke.  We'd have to save a few trillion to be broke.