What's All This "Eat The Rich Stuff", Anyhow?

There's been a recurring theme in all this "occupy whatever street" going on: "eat the rich".  Sure, the comment isn't exactly original, and I have no idea where it originally came from, but it keeps coming up.  From Occupy Denver this past weekend (source): 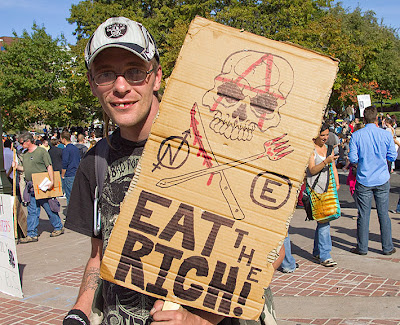 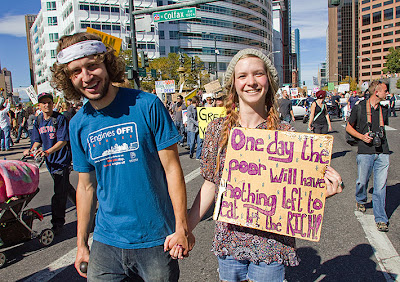 (Confidentially, sweetheart, if you eat the rich, you'll be lucky to get one meal.  Then you'll have to start eating your fellow protesters.)

I'm sure everyone has seen the two fingered peace sign of the late 60s/early 70s; almost as big a cliche then as now.  Chances are you don't know that the Weather Underground (Bill Ayers, wife Bernadine Dohrn and other felons) used the three finger fork sign as a non-verbal recognition.


Dohrn's love of violence reached a level bordering on madness. Speaking to a Weather Underground "war council" in Michigan in 1969, Dohrn gave a three-fingered "fork salute" to mass murderer Charles Manson. Calling Manson's victims the "Tate Eight," Dohrn gloated over the fact that actress Sharon Tate, who was pregnant at the time, had been stabbed with a fork in her womb. "Dig it. First they killed those pigs, then they ate dinner in the same room with them, they even shoved a fork into a victim's stomach! Wild!"

So do these leftist/communist/statist prick protesters and Dohrn really want cannibalism?

The problem is very simple: "it's the spending, stupid", not how much "the rich" have.  If these twits got their way and the government took every single penny from every billionaire, and not just the every penny from the top 1%, but from every single person with an income of over $250,000, the money would be gone in under 200 days.  It wouldn't pay for the current spending programs for a year, let alone add all the programs they want.  For a refresher, watch Bill Whittle's excellent video.