In part 2, I presented a simple calculation that showed in order to run my ham radio emergency communications (EMCOMM) would require 11 AH (amps*hours) of battery charge.  In WH, just multiply that times the battery voltage of 12, and we'll call that 132 WH.  There are maps available that tell you how much sunlight to plan for per day, and in our area, it's about 5 hours per day.  That says if I charge a battery at 132WH divided by 5 hours (H), I need a constant output of 26.4 Watts.

I started keeping an eye out for options along these lines and found a deal on a pair of 20W panels that would make a good battery charger.  I found these at a ham radio swapmeet, not at a store, but Amazon sells the same panels at about $10 each more than I paid.  Two of these in parallel will be capable of 40W, and should be able to charge a battery with ease in the (average) 5 hours I expect.  They should really charge that much in under 4 hours (4*40 is 160 WH).  In fact, they are capable of more, and as far as possible, I will always "round up" my answers when designing a system, to help overcome the unavoidable little inefficiencies that creep in. 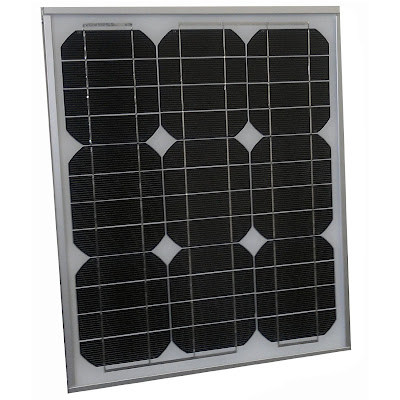 With that in mind, let's put a shopping list together, with a little explanation along the way:

The most important part is the battery.  I want to take 11A hours out, and I'd like to charge my battery when it's no more than 50% discharged.  That says I need a minimum of a 22 AH battery and I'd like more, of course.  Something like this 35 AH battery gives me more than another 11 AH margin (in case a cloudy day doesn't allow any recharging time) and isn't much more expensive than a smaller battery.

If you're going to wire solar panels in parallel, you have to consider that under some conditions, one of them might try to force current into the other - or the battery might try to force current into them.  To prevent that, most writers recommend a diode in series with the panel output.  A diode is the basic semiconductor element, and we use it here because it passes current in only one direction.  While there is more written online about diodes than most people would want to read, the important thing to know about here is that there is a voltage drop across the diode that means some of our precious, hard-won energy from the sun is going to be lost in that diode.  We want a Schottky diode because they have a lower drop than an typical silicon diode.  Since each panel will deliver 1.2 A, a Schottky rated for 2A or more is all we need, and a 1N5822 (pdf datasheet) is fine.  These are 3A diodes that will drop about 1/2V at 3 A and set you back about a 25 cents each. They should go in the positive lead off each panel with the banded end away from the panel.

We'll need a charge controller.  An MPPT controller is the most efficient, but we're not dealing with an extreme system here.  Since our charge rate is only about 2-2.5 A, anything above that is for margin or future growth.  A 10A MPPT charger seems to go for about the price of the battery, and a 10A PWM charger is about half that.  I will leave that choice to you, but will probably go with the PWM controller myself.

Finally, we'll need a whole mess of odds and ends.  Probably the most important thing we'll need is a fast blow fuse to put on the battery output.  As mentioned in the comments to part 3, a battery bank can be a destructive device, and while you could argue this isn't needed in so simple a system, it's just a good idea to put something there.  Mount a regular or fast-blow fuse close to the battery to protect it from a short circuit downstream.  (Big systems use a special, rugged fuse called a "Class T" fuse and holder.  They're a bit hard to find in a smaller current, but worth looking into.)  We'll need wire, and for 2 A between the charger and panels, if they're within five feet, #18 wire is fine. Ten feet of #18 would result in a loss of 0.13 V at 2A (~1/4W) - handy calculator here.  It never hurts to use bigger wire, except for the pain in your wallet.  The wire in your walls is probably #14 or #16 and those are fine to use if you have it lying around.  We'll need terminals to connect everything and probably a wire stripper/crimper, if you don't have that.  The only other thing we'll need is a way to connect the radios to the battery, and a cigarette lighter plug adapter is pretty much a standard way of doing that.  For a permanent installation, Anderson PowerPoles are standard connectors in the amateur world, and a connection from a beginner kit like this to the battery is a good idea.

Oh, yeah.  We should also build some sort of portable stand, perhaps a cart, to carry the panels and battery outside to charge.  More to follow, including usable wiring information and mechanical stuff.

Posted by SiGraybeard at 6:57 PM