This probably goes best with my "Tales from the Over-Regulated State" series, except I don't have a specific example.  Just this take home fact:

They're not shy or ashamed about this - the web site is there to help you find all those new regulations.  So I screen-capped it. 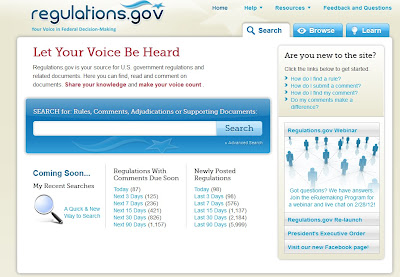 In what was my most-read piece for the longest amount of time, I wrote:


Although the legislators and regulators never consider this, every regulation consumes some amount of time and money to comply with.  The new Finance Reform bill [note: Dodd-Frank - SiG] has been estimated to required the development of 250-300 new regulations.  Every regulation slows down, hinders and costs every honest business real money.  Despite the widespread talk of corrupt CEOs and general lack of corporate ethics, I've been working in the manufacturing industry since the mid 1970s, and every company has had an active, if not aggressive, ethics compliance program with requirements for training and seminars every year.  There are exceptions but most companies do their best to be honest and law-abiding.  Government seems to think it's mere coincidence that countries with lower tax rates and lower regulation attract business, and they demonize companies for moving to countries where the environment is better.