Apocalypse One of These Days

There's a big, nasty question that several of us have been asking since the election: just how long do we have until the economic meltdown that's coming.  Is it once we get into the New Year?  Is it years away?  I don't believe we have 10 years, despite the CBO claiming 2027 before the collapse.  I don't think there's enough significant digits for them to know.

One of our big problems is the things we've tried to fix the economy. Bayou Renaissance Man links to Karl Denninger at the Market Ticker in "Math Wins".  Karl is on a mission to get everyone to realize monetary inflation is a tax.


The "Money Fairy", that is, deficit spending and/or monetary games such as QE are exactly identical to a tax on the economy.

Of course, even Ben Bernanke himself has said as much (almost at the end of that video: skip to the 2 minute mark unless you love hearing Ron Paul talk).

The coming collapse can't be stopped by fixing the "fiscal cliff" we keep hearing about.  Letting the tax rates go up will raise about $50 billion dollars - 12 days worth of deficit.  How much good will this do?  There's an experiment you can do to demonstrate the effectiveness of this, if you happen to live in Hawaii, try pissing on an erupting volcano to stop it.  It doesn't matter what the tax rate is, you can't fix the problem that way, spending must be cut and the big entitlements addressed.  Social Security, and Medicare themselves take up all revenue, so we decided to double down and add a couple of trillion in defict spending for Obamacare.  As always, the debt ceiling will be raised, and, as Mark Steyn puts it:


In the weeks ahead, Democrats and Republicans will reach a triumphant “bipartisan” deal to avert the fiscal cliff through some artful bookkeeping mechanism that postpones Taxmageddon for another year, or six months, or three, when they can reach yet another triumphant deal to postpone it yet again. Harry Reid has already announced that he wants to raise the debt ceiling — or, more accurately, lower the debt abyss — by $2.4 trillion before the end of the year, and no doubt we can look forward to a spectacular “bipartisan” agreement on that, too. It took the government of the United States two centuries to rack up its first trillion dollars in debt. Now Washington piles on another trillion every nine months. Forward!

It has more to do with the enormous, gaping, largest-in-history deficit hole we dug ourselves into.  Steyn, again (RTWT):


In the course of his first term, Obama increased the federal debt by just shy of $6 trillion and in return grew the economy by $905 billion. So, as Lance Roberts at Street Talk Live pointed out, in order to generate every dollar of economic growth the United States had to borrow about five dollars and 60 cents. There’s no one out there on the planet — whether it’s “the rich” or the Chinese — who can afford to carry on bankrolling that rate of return. ... In order to avoid the public humiliation of a failed bond auction, the U.S. Treasury sells 70 percent of the debt it issues to the Federal Reserve — which is to say the left hand of the U.S. government is borrowing money from the right hand of the U.S. government. It’s government as a Nigerian e-mail scam, with Ben Bernanke playing the role of the dictator’s widow with $4 trillion under her bed that she’s willing to wire to Timmy Geithner as soon as he sends her his bank-account details.


Americans as a whole have joined the rest of the Western world in voting themselves a lifestyle they are not willing to earn. The longer any course correction is postponed the more convulsive it will be. Alas, on Tuesday, the electorate opted to defer it for another four years. I doubt they’ll get that long.

And that's as precise as I can get.  We are the brokest nation in history, so far past broke, you can't even see it with binoculars.  We're creating money out of thin air to buy our bonds to make it look like we're not just creating money out of thin air.  Does anyone honestly think the Chinese, Japanese and our other creditors don't realize that?   And what do you think will happen if they start to act on that?  The Chinese government is smart.  They probably won't destroy us before they've gotten their money's worth.  They may just round up people to work at Foxconn, the Apple factory where workers are so happy, they leap to death from the nearest balcony. 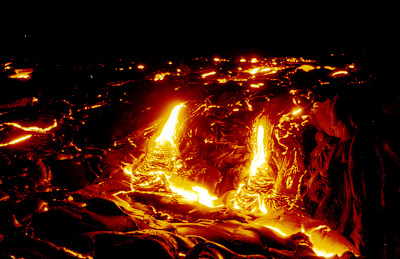 Kilauea.  I recommend drinking a lot of beer before you go try to put this out...